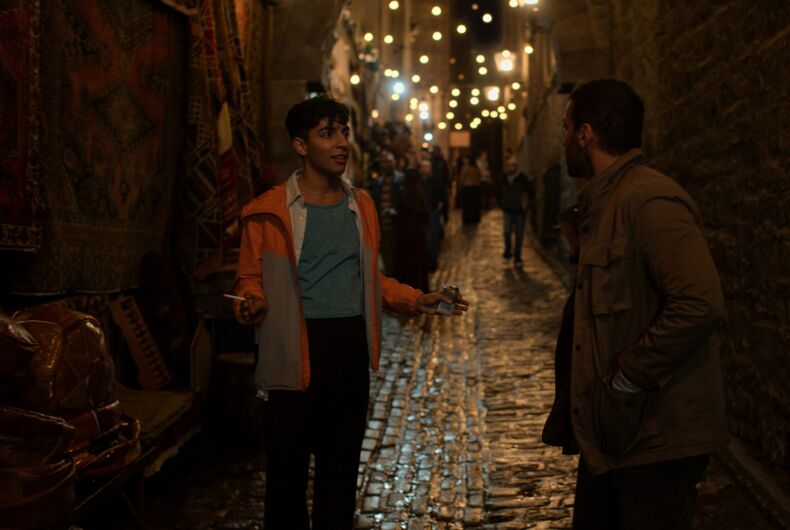 An episode of the anthology series Little America has been completely censored in 11 countries in the Middle East and Asia, a writer of the episode reports. A lead actor in that episode was also prevented from entering the United States for the show’s Los Angeles premiere yesterday.

Season 1’s last episode (of eight total), “The Son”, is focused on “a gay Syrian refugee seeking asylum in the [United] States.” Like the rest of the show, each episode is stands alone and is based on true stories as published in Epic Magazine. The entire first season came out on last Friday, January 17, 2020, via the streaming service Apple TV+.

Related: Bisexual Olympian says some opponents won’t shake his hand. He regrets coming out on TV.

Episode co-writer Amrou Al-Kadhi, who is non-binary and Iraqi, expressed their “heartbreak” over the news – but was also unsurprised, as they “knew we wouldn’t come this far without major set backs” from portraying ‘negative’ perceptions of Middle Eastern culture at points.

“We were extremely keen to avoid the narrative that an immigrant ‘escapes scary brown Arab land and comes to happy white American land’, and we really wanted to mine the complexities of the Middle East – it’s majestic culture – while also exploring its homophobia without judgement,” they told PinkNews.

According to Apple TV+’s descriptor, “The Son” is an episode where a boy named Rafiq “escapes from his home in Syria after his father discovers he is gay.” Rafiq, played by Haaz Sleiman, is “forced to go on the run until he finds his ‘home’ in the unlikeliest of places.” Stephen Dunn is the episode’s other co-writer.

We’ve just found out that our episode in #LittleAmerica has been banned from several Middle-Eastern countries. We’re so sorry and we’re working to make it valuable. If you have experienced this or are noticing changes, please let us know. Amrou & Stephen x pic.twitter.com/HAzt7ejxk3

Rafiq’s story is a rewritten version of Shadi Ismail’s, who relocated from Syria to Boise, Idaho while fearing for his safety and only knowing one person in all of the United States. Ismail has previously had his story shared on Queerty. “I left everything to be who I am,” he’s quoted in the 2014 article.

Ismail told The Washington Post that actor Haaz Sleiman’s portrayal ‘moved him to tears’. “All my life I was hoping to see a gay Arabic man on TV,” Ismail says. “In our culture, we’re told we should be killed because nobody wants us. And then it turns out my story will be the one on TV.”

The show had to relocate filming to Canada to cast Arab actors in the episode, many of whom are from countries that fall under Donald Trump’s travel ban. “There are countless other Rafiq’s right now whose lives are threatened because of the current global politics, and what we wanted to do was give them a voice,” Al-Kadhi continued.

Subsequently, the episode’s co-lead actor, Adam Ali, was banned from entering the country via Dublin this weekend, because he is from Libya and visited the country last year for a wedding. Ali, who plays Zain in the episode, remains optimistic – saying that “There’s always tomorrow, right?”

“I was drawn to my character Zain for [his] ability to find the light in darkness,” Ali told Canadian magazine NOW. “It’s much easier for me to compartmentalize and block out yesterday’s events, but I’d like to think it’s important to have a conversation, and being vocal is one way to do that…The ‘travel ban’ ultimately stifles me; the opportunities I can access, the stories I can play a part in telling…”

“As long as a blanket generalization exists such the one being enforced by the ban, millions of people like me today will be held back from being able to participate in changing the world,” Ali concludes.

Most of the 11 countries in the “blanket ban”, as described by PinkNews, are not named. Russia is named as one of them in some sources.

Little America is written and executive produced by Lee Eisenberg, Kumail Nanjiani, and Emily V. Gordon. Eisenberg and Sian Heder are the showrunners. Universal Television and Epic Magazine also contribute to the show’s production. The show has already been renewed for a second season.

This is the harsh reality of making queer Arab work. The Trump travel ban meant we had to move this shoot out of America. And now our #LittleAmerica episode has been banned in 11 countries. We’re so sorry about this – please know we’re working hard to find a way to get it to you. pic.twitter.com/X3gIBHNsON

Joe Rogan may cost Bernie Sanders more support than ever

Bayard Rustin was convicted for having sex with a man. Lawmakers want to finally address it.