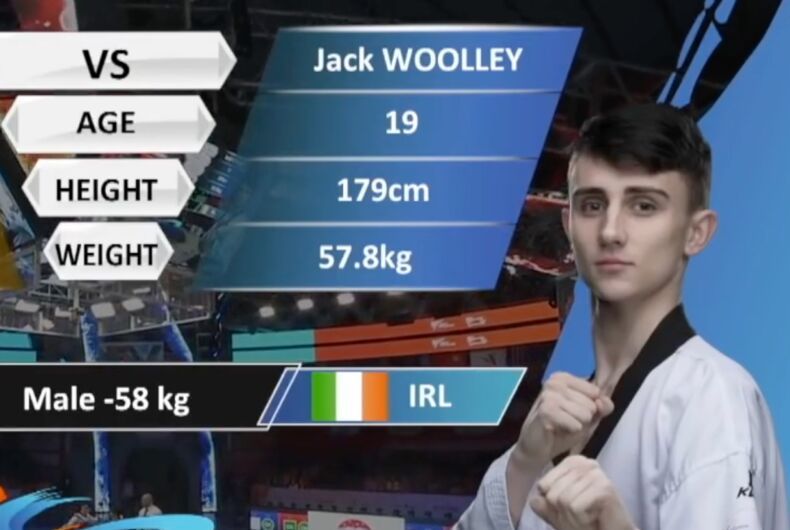 Olympian Jack Woolley is the first Irish athlete to qualify in Taekwondo. While Woolley barely lost a chance to compete in the Rio Olympics, the 21-year-old martial arts champion will make the trip to Tokyo.

In the Road to Rio documentary produced during the lead-up to the games, Woolley – then 17 – came out as bisexual. Now he says he regrets doing it and says some of his opponents won’t shake his hand after matches.

Related: A former Olympian just compared drag to blackface, but is she right?

Woolley had just come out to his parents when the documentary aired, but he hadn’t come out to his grandparents. He said telling them caused anxiety, but what he truly doesn’t like is being labeled.

“I just wish I never labeled it. I still don’t like labeling it. People are just hell-bent on giving everyone labels nowadays,” he told the Irish outlet Extra.ie. “I’m not the Welsh rugby player [Gareth Thomas] or Tom Daley, they are big names and people talk about them but if you notice, I didn’t even know his name, he was just the rugby player.”

“I don’t want to be that,” he continued. “I want to be the first Irish Olympian in my sport, the lad from Tallaght who went to the Olympics, not Jack the gay athlete.”

“People assume a lot about you when you are given a label. They will say you are very flamboyant or whatever, but the thing is I kick people for a living.”

In a sport dominated by Muslims, Woolley says the road to acceptance has been made more difficult after coming out. And as the only Irish Taekwondo competitor, it’s even more lonely.

“It is tough, my sport. A lot of the top athletes would be Muslim, so you can’t be too open about it,” he said. “I have had some opponents who wouldn’t shake my hand and I’m just thinking ‘You need to cop on.’ Some have, though, one of the top fighters in the world came up to shake my hand after I won the European silver. I appreciated that.”

“Most people don’t care, though, and they shouldn’t care. It’s only if you have a problem with me, I will have a problem with you. Maybe it can be good, maybe I can be an inspiration to some young people. And if someone wants to talk to me about what they are going through, they can but I’m not throwing it in your face.”

Despite going through the death of his grandmother, his father’s life-threatening illness, and the response to his coming out so young, Woolley has continued to pursue his dream of going to the Olympics.

TOKYO 2020 OLYMPIC GAMES QUALIFIED 🇮🇪✅. . Today I have made history in becoming the first ever Irish Taekwondo Athlete to qualify for an Olympic Games! Blood, sweat, tears, highs, lows and many sacrifices have lead to this moment and I am extremely grateful and proud. . (If I mention everyone this would be an even longer post than it already is) I’d like to thank my friends, family and team mates for their constant love and support since I first started my taekwondo career! To @sportireland , @team_ireland_olympic and @irishtaekwondounion for their great service to me and Taekwondo as a whole in Ireland. . . But most importantly I’d like to thank my coach @robert.d.taaffe , who has not only travelled the world with me to get those ranking points but has made extreme sacrifices in his day to day life in order to get us both on that plane to Tokyo! As every player and coach in sport does, we have had really good times and some not so good ones, but we pushed through, worked as a team and have turned our Olympic dream into a reality! . . Now it’s time to rest and enjoy Christmas with my friends and family. 2020 will be time to work even harder so I’m not just the first Irish athlete to qualify for Ireland but to be the country’s first Taekwondo medalist! 💪🏽🥇. . #wt #worldtaekwondo #ireland #olympics #qualification #tokyo #2020 #proud #irl #mma #wtf