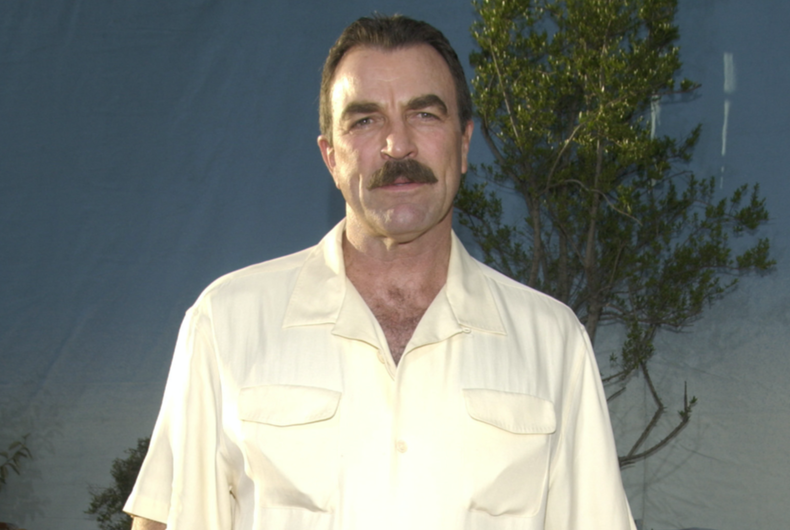 Aug 11, 2003: Actor Tom Selleck out and about in Hollywood, CAPhoto: Shutterstock

It was not The Christine Jorgensen Story, which came out in 1970 and was quite bad.  That was based – to some degree at least – on Jorgensen’s autobiography, but it had many of the failings so typical of trans movies even today, including a cis actor playing the trans role. In this instance, it was a kid named John Hansen. He did have a few small acting jobs afterward but, for the most part, the movie began and ended his career.

Fortunately, Tom Selleck was nowhere near that movie; his bad luck would come a decade later in losing out on the chance to be Indiana Jones. But he got his start in a movie that was even worse.

Related: The ‘Godmother of Rock & Roll’ was a black lesbian

The worst trans movie of fifty years ago also was based on a book, but a work of fiction: Gore Vidal’s 1968 novel Myra Breckinridge, a book that you know has to be good simply by virtue of William F. Buckley feeling the need brand it as pornography to Vidal’s face during their infamous “Crypto-Nazi” debate during the 1968 Democratic Convention.

The novel is a scathing critique of the movie industry and, to some degree, the sexual mores of the late 1960s.  Problematic as it is given how Vidal exploits the concept of transsexuality to drive the story (supposedly, Myra too was based in part on Christine Jorgensen or at least her 1950s notoriety, neither of which he really cared for; but what should one expect from a gay man who was not closeted but who nevertheless refused to accept the concept of a ‘gay man’?), it would still be difficult to call the book transphobic in the purest sense of the word.

Myra Breckinridge the novel does stand the test of time and is worth a read – particularly for those interested in a true immersion into the west coast media anti-reality of fifty years ago.

While plugging Myra the movie on the Dick Cavett Show, star Raquel Welch held out hope that the move would be regarded as important.  She was trying to escape from the image she’d acquired a few years earlier in One Million Years B.C.  (Remember the poster in Andy Dufresne’s cell at the time of his escape in Shawshank Redemption?)

And to some degree she did.  She’ll likely be remembered as much for episodes of Seinfeld and The Muppet Show – as well as Mother, Jugs & Speed – as she is for Million. And Myra.

“It’s not going to be dismissed,” she said of Myra the movie in 1970.  One could say she was at least half right.  Though it was, for the most part, dismissed, it has never been forgotten – much to Welch’s chagrin.

Ironically, it was the other guest on that same Cavett episode, Janis Joplin, who managed to offer a concise takedown of the movie while also, albeit perhaps unintentionally, channeling the feelings of not just trans people through the ages as well as film critics.  “I couldn’t understand it,” she said.  “It kept changing all the time.”

Presumably, Joplin was referring to how the title character of the novel was essentially two characters in the movie.  Welch, of course, was the post-transition Myra while film critic Rex Reed (presumably gearing up for his many appearances on The Gong Show later in the decade) was the pre-transition Myron.

Both were in the novel but had the film demonstrated any real attempt to actually be an adaptation, there would have been no way that Reed could have received star billing alongside Welch.  Myron does not appear until near the novel’s end – via one of the shortest chapters in literary history and a mere handful thereafter.

Conversely, Reed and Welch both receive ample screen time and even often were onscreen at the same time – something wholly incompatible with the novel.

That was tame compared to Reed’s remembrance:  “This is truly a movie that was made by people locked in their dressing rooms waiting for their lawyers to arrive.”

The movie was the last for William Hopper (Paul Drake from Perry Mason, and Hedda’s son) and the first for a pre-mustache Tom Selleck. It was one of the last for West and one of the first for Farrah Fawcett. And because, why the hell not, there was also Jim Backus (yes, Thurston Howell, III, and Mr. Magoo) and John Carradine.

The only positive I’ve ever taken from it has been the reaction to it by people – LGBTQ and straight – born a quarter-century after it was filmed.

I’ve occasionally shown it in trans history classes.  The younger folks laugh – very clearly not at trans people, but at just how ridiculous that Nixon-era depiction of transsexuality was (in and of itself as well as in contrast to Vidal’s novel).

I’ll take that as a win – not a landslide of course, but still a win.

Is Tulsi Gabbard about to drop out of the presidential race?

Drag queen Jasmine Masters is the most viewed GIF of 2019