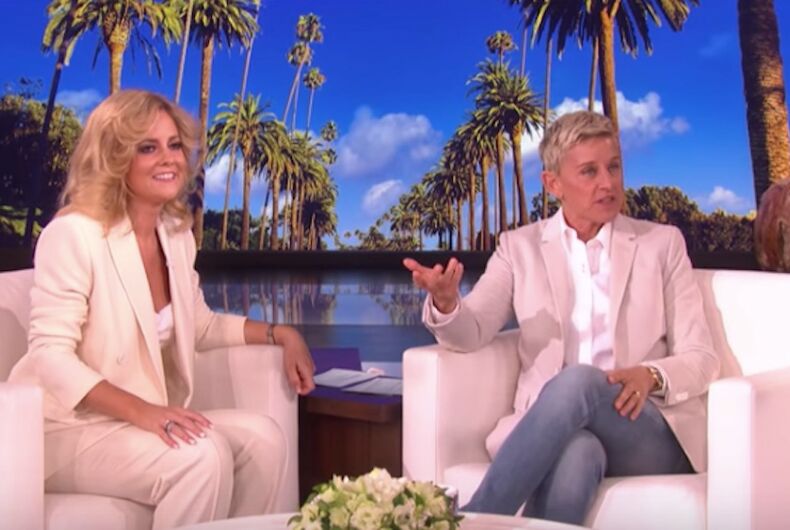 A social media game has turned British singer Charlotte Awbery into a viral sensation after her jaw-dropping rendition of bisexual pop sensation Lady Gaga’s song, “Shallow,” in a London train station. Since then, Awbery has wowed viewers yet again with another incredible performance of “Shallow” on The Ellen Show.

It all started when Awbery was walking through a London Tube station. There, she was approached by social media personality Kevin Freshwater during a game called, “Finish the Lyric.”

Related: Lady Gaga surprised an emotional gay fan & comforted him as he talked about his dad’s rejection

Freshwater began to sing the opening lines of “Shallow,” and when Awbery continued them, Freshwater was stunned by the voice she revealed and encouraged her to go on.

Here’s a recording of Awbery stunning performance of “Shallow” in Freshwater’s “Finish the Lyric’ game:

SOUND ON: A comedian named Kevin Freshwater asked a woman on the street to finish the lyrics of "Shallow" – and now, A Star Is Born https://t.co/Tu48oGqa7F pic.twitter.com/QJW0AQYzCD

Awbery then let loose a belt that has been heard around the world. The video has been viewed more than 60 million times and even helped bump Shallow back into the iTunes Top 40.

“Shallow” by @LadyGaga and Bradley Cooper re-enters the Top 40 on US iTunes at #30. pic.twitter.com/BO5sU7fNlR

According to Buzzfeed News, Awbery gained 100,000 Instagram followers in just the few days after the video went viral. She now has 570,000 followers.

In her interview with Ellen DeGeneres after her performance on the show, Awbery disputed claims that the moment with Freshwater was staged, emphasizing that she was truly just on her way to meet a friend.

She told Ellen she’d spent the past 15 years singing in pubs, bars, and restaurants and also at weddings, and that her dad told her to never give up on her singing career.

In a recent Instagram post, Awbery told her hundreds of thousands of new fans that she can’t wait to show them some of her own music.

What is pansexual? What is the difference between pansexual and bisexual? We got answers!

A third of Poland has declared itself “LGBTQ-free zones”