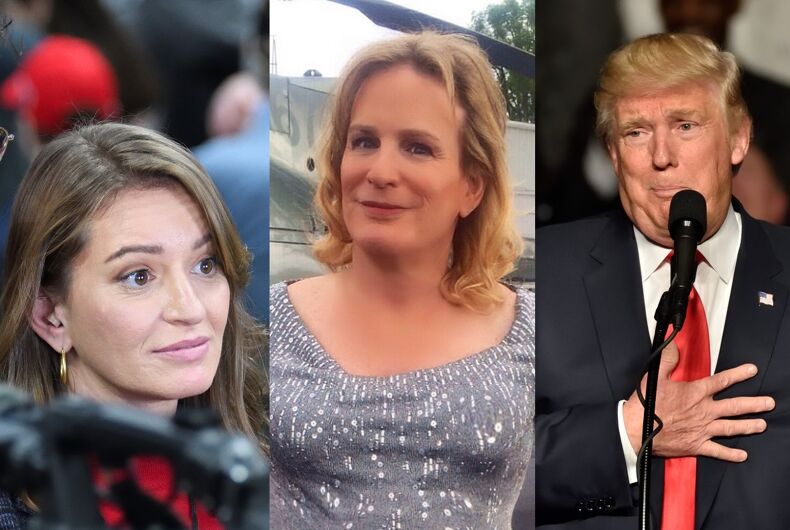 Donald Trump once made fun of a journalist for having a “t****y dad,” according to a new book co-authored by two Daily Beast journalists.

Lachlan Markay and Asawin Suebsaeng’s new book, Sinking in the Swamp: How Trump’s Minions and Misfits Poisoned Washington, bills itself as an “eyewitness account” of how the Trump administration brought an “unprecedented awfulness” to Washington in the form of “charlatans, conspiracy theorists, ideologues, and run-of-the-mill con artists” who were given powerful political jobs.

An excerpt released in advance discusses Trump’s dislike of MSNBC host Katy Tur (then a correspondent for NBC News). She interviewed him just after he announced his campaign in 2015 and asked some hard questions about foreign policy, setting off years of insults at campaign rallies where he would refer to her as a “third-rate journalist” and “Little Katy.”

Trump famously loves giving out nicknames, and several sources told the authors that his nickname for Tur is “that b***h with the t****y dad.”

Katy Tur’s biological father is Emmy Award-winning journalist Zoey Tur, who transitioned in 2013. She has been critical of Donald Trump, calling him a “fascist” and “mentally ill.”

The Tur’s relationship has been rocky with the two not speaking for years. In a 2017 Facebook post, Zoey claimed that her transition had caused a rift between the two and Katy did not support LGBTQ rights. Katy denied the family drama was related to Zoey’s transition.

“Two years before Trump launched his presidential bid, [deadname] Tur started hormone treatment to become Zoey,” Markay and Suebsaeng wrote. “And ever since the days of the 2016 race, she will forever be known in President Trump’s mind as that ‘t****y’ with the ‘b***h’ kid who annoyed the billionaire demagogue so frequently during his big, loud run for office.”

The book presents this as part of Trump’s history of harassment and belittling comments towards women in the media who question him.

Another incident mentioned in the book happened after the View host Meghan McCain called Trump “pathetic” when he criticized her father, former Sen. John McCain (R-AZ), on social media. Trump, according to the book, called up friends to make fun of her as part of a “cathartic” hate ritual.

One person described as a Trump “confidante” said that Trump started a diatribe against McCain with the question, “She’s been getting fatter?” That person said that he put Trump on speakerphone for everyone to hear his diatribe about McCain’s weight.