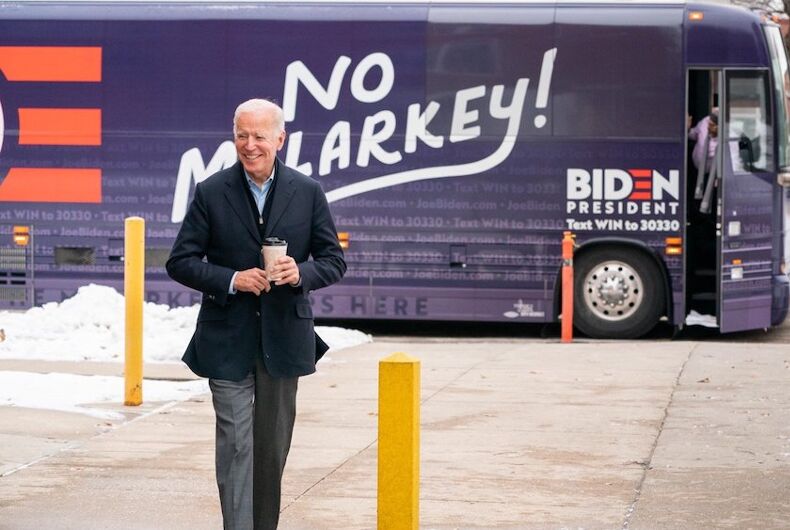 After over a year of campaigning by the Democratic presidential candidates, voters finally get to have their say tomorrow.

Or Iowa voters, at least – about 170,000 of them (based on the 2016 turnout). They’re doing so in a convoluted system that is more like a town hall than a anonymous voting booth. Plus votes for candidates have to hit a minimum threshold to count, and if a candidate doesn’t hit the threshold, his or her supporters get to change their vote to someone else.

Related: Will endorsements from LGBTQ celebrities really sway any voters?

On top of all of that, the field has been so fluid that it’s not really clear who’s a frontrunner, and who’s likely to be an also-ran.

Not that any of this matters, at least as far as political horseracing goes. When the results come in tomorrow night, the media will breathlessly anoint certain candidates with momentum as the leaders, or pen obits for underperforming campaigns.

There are a few things that are clear going into the caucuses. For one, Pete Buttigieg has a lot riding on the results. He has invested a lot of time and money from his vast campaign chest in organizing in the state. As a fellow midwesterner, he has a built-in appeal for Iowans. His campaign strategy has been to perform well in Iowa and New Hampshire (two states that are disproportionately white) and establish himself as a viable alternative to Joe Biden.

Unfortunately, there are some signs that Democratic voters may be hesitating about Buttigieg. More than anything else, Democrats want a candidate who can beat Trump, and they don’t seem entirely convinced that a 37-year-old who is a former mayor of a small town is that candidate. Added to that is the concern about Buttigieg’s inability to gain traction with African-American voters.

In some ways, the Des Moines Register‘s decision to pull their final poll before the caucuses may have been good for Buttigieg. (In at least one case, Buttigieg’s name was omitted from a list of candidates read by a poll caller, bringing the whole poll into question.) Buttigieg has been slowly dropping in national polls. If the Iowa poll showed a similar trend, caucus goers may have decided that their support should go to someone who is doing better.

On the other hand, a CBS poll released today showed Buttigieg in third place, well within the margin of error with frontrunners Joe Biden and Bernie Sanders.

Both Sanders and Biden have a lot riding on the Iowa results. Sanders has been on the ascendant. If he does well, he will go into the New Hampshire primary (which happens next week and which he won in 2016) with momentum. Rightly or wrongly, he’ll be dubbed the frontrunner.

Vice President Joe Biden is playing down expectations about the Iowa results, biding his time until the South Carolina primary, where he is expected to dominate because of his strong support among black voters. His campaign is stressing that Iowa is “the beginning, not the end.”

The other two major candidates really need a strong showing tomorrow. Amy Klobuchar has been hanging on, but her campaign needs a boost to survive. If she can’t do well in a neighboring state, then her prospects look dim, no matter how qualified she is.

For Elizabeth Warren, the issue is Sanders. They are largely competing for similar voters, and if he does really well in Iowa and then New Hampshire, her campaign could become redundant.

Of course, the results tomorrow could be just as confusing as voters shifting support. The fact of the matter is each candidate has significant flaws. Democratic voters see the 2020 presidential election as one of the most important in modern history. But at some point, voters have to pick a candidate and hope for the best. That picking starts tomorrow.