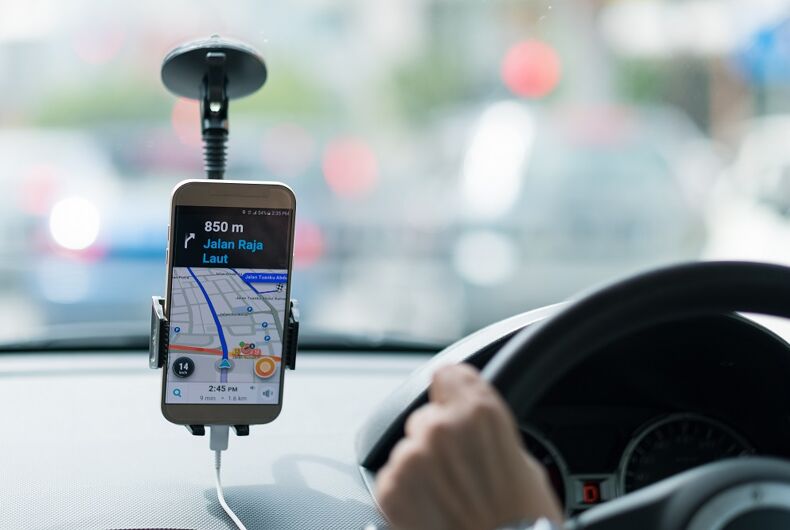 An Uber driver asked two men to stop kissing in the back of her car because of her Christian faith.

One of the passengers, Finn Davies, had attended a birthday party on Saturday night at his friend’s home in London, where he met and flirted with “a handsome man” who it turned out lived in the same direction as he did.

Related: This footage of an Uber driver kicking out a lesbian couple is jaw-dropping

Early Sunday morning, they decided to share an Uber home.

“It was around 3 a.m. when I decided to go home and I suggested to the handsome man that we share an Uber as he had also said he was leaving shortly, too,” Davies told Pink News.

The two ended up kissing in the back of the car, and after about a minute, the driver interrupted.

“Stop that please, I’m a Christian,” she said, according to Davies.

Of course, the situation made the passengers feel incredibly uneasy. “Her tone was stern but calm,” Davies said. “We immediately stopped and went silent.”

Though the ride was supposed to have two stops, both men got out at the first one, unable to spend any more time in the car.

Feelings of embarrassment, Davies said, had quickly turned to feelings of anger and discomfort.

After it happened, Davies took to Twitter. He wrote: “Last night, I got an Uber home with a boy and had a smooch in the back, en route. Mid-smooch the @UberUK driver asked us to stop because she was a Christian. That’s not acceptable, right?!”

Last night, I got an Uber home with a boy and had a smooch in the back, en route. Mid-smooch the @UberUK driver asked us to stop because she was a Christian. That’s not acceptable, right?!

The driver in question has been with the company for two years and has a 4.93 rating, but Uber, but has spoken out in support of Davies and the other passenger.

“What has been described is totally unacceptable,” an Uber spokesperson told The Independent. “Uber has a zero tolerance policy towards discrimination of any kind and we are currently investigating this incident.

“Any driver found to have violated this policy faces permanent deactivation from the app.”

Davies spoke with The Independent as well, saying of the driver, “I wondered if she stoned adulterers in the street, ate shellfish, or reprimanded people for braiding their hair.”

“You can’t pick and choose what you believe in from the Bible. If you are going to take one thing literally you have to take everything literally. Otherwise you are a bigot hiding behind a book.”

Incidents like this one aren’t all that rare, either. A 2019 study that found Lyft and Uber drivers are almost twice as likely to cancel on passengers with a rainbow flag in their profile than on passengers without one.

Integrity is on trial during Donald Trump’s impeachment hearings