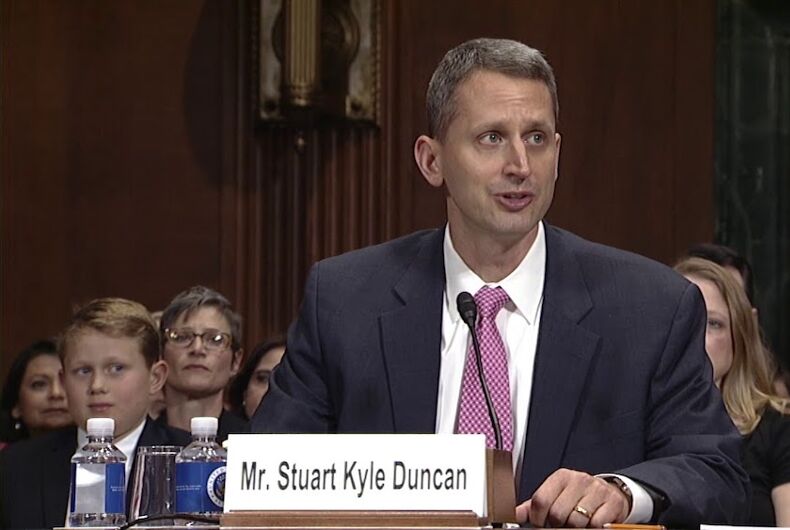 The inmate, Kathrine Nicole Jett, was sentenced to 15 years in prison for child pornography in 2012, came out as a trans woman and began hormone replacement therapy in 2015, and had her name changed by a Kentucky state court in 2018. She said misgendering by prison guards made her feel “uneasy,” “disrespected” and discriminated against because of her gender identity.

However, Duncan’s ruling against Jett fell largely along technical merits. He claimed that the inmate’s name-change documents had falsely claimed residence in Kentucky even though she was incarcerated in a Pennsylvania penitentiary at the time. Duncan added that her request was neither issued 14 days after sentencing nor to correct a clerical error, as required by the legal protocol.

While Duncan admits that some federal courts and prisons have used a trans inmate’s personal pronouns as “a courtesy,” he wrote that there’s no federal statute or rule requiring courts or judicial figures to use pronouns other than those matching the gender a litigant was assigned at birth.

He wrote, “If a court were to compel the use of particular pronouns at the invitation of litigants, it could raise delicate questions about judicial impartiality which ‘assures equal application of the law.'”

While acknowledging that many courts are debating trans rights, Duncan said courts that choose to use a trans litigant’s personal pronouns “may unintentionally convey tacit approval of the litigant’s underlying legal position.” In other words, he thinks it’s legally biased for a court to respect a trans person’s pronouns.

He also wrote that if he granted Jett’s request, then other inmates could require judicial figures to use more modern gender-neutral pronouns like xim, xyr, eir, hir, and faerself.

In the past, Duncan has called transgender people “delusional.” Before becoming a judge, he served as a lawyer in numerous LGBTQ rights trials — taking the anti-LGBTQ side each time.

HIV transmissions dropped 71% in the UK. But don’t expect a similar drop in the US.