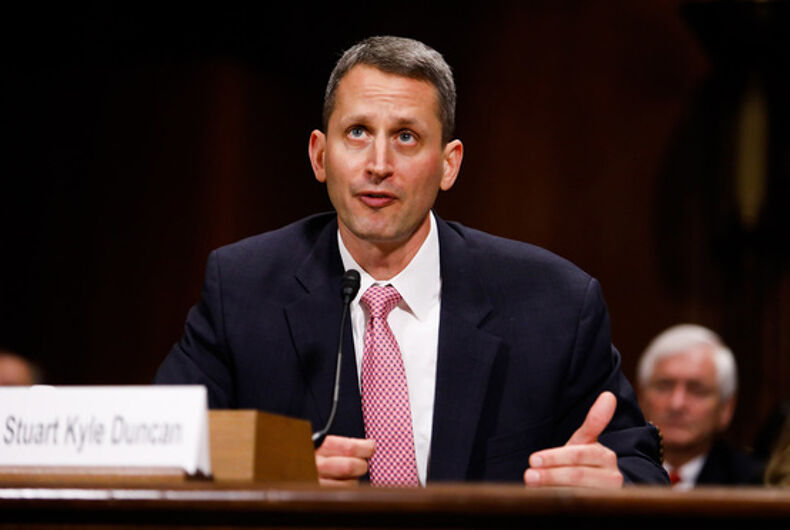 Stuart Kyle Duncan just got another step closer to a seat on the U.S. Court of Appeals for the Fifth Circuit. That’s bad news for LGBT Americans.

Republicans spent eight years making sure that seats on the Fifth Circut court of appeals remained empty while Barack Obama was president. Now they’re rushing to fill them, and Hobby Lobby’s own lawyer is creeping towards a lifetime appointment.

The Senate voted 50 to 44 yesterday to advance the nomination of Stuart Kyle Duncan, Donald Trump’s pick for the Fifth Circuit court of appeals. He’s one of many politically far right men the Trump administration has nominated, two of whom are already confirmed, who are hostile to civil rights, workers’ rights, consumers’ rights, environmental protection, voting rights, LGBTQ rights, and reproductive rights.

Duncan is the “Hobby Lobby Lawyer” who was instrumental in savaging women’s access to insurance coverage for contraceptive care. He served as lead counsel in Burwell v. Hobby Lobby Stores, Inc. He opposed the Affordable Care Act’s contraception mandate in an amicus brief, and he authored a brief opposing a Washington law that required pharmacies to stock some forms of birth control.

Duncan’s record on LGBT issues is particularly nightmarish. For those who’ve justifiably blocked it out, here’s a refresher.

The Fifth Circuit Court of Appeals encompasses states with high percentages of people in communities that already face pervasive discrimination.

Duncan’s appointment will make it even harder for women, people living in poverty, people of color, and LGBTQ people to seek justice against discrimination.

Long after the Trump administration and the Republican Congress are finally dispatched to the dustbin of history, America will still have to deal with Duncan’s twisted logic and bigoted viewpoints.

The Simpsons tackled Homer’s homophobia in the 90s, but won’t talk about the problems with Apu now