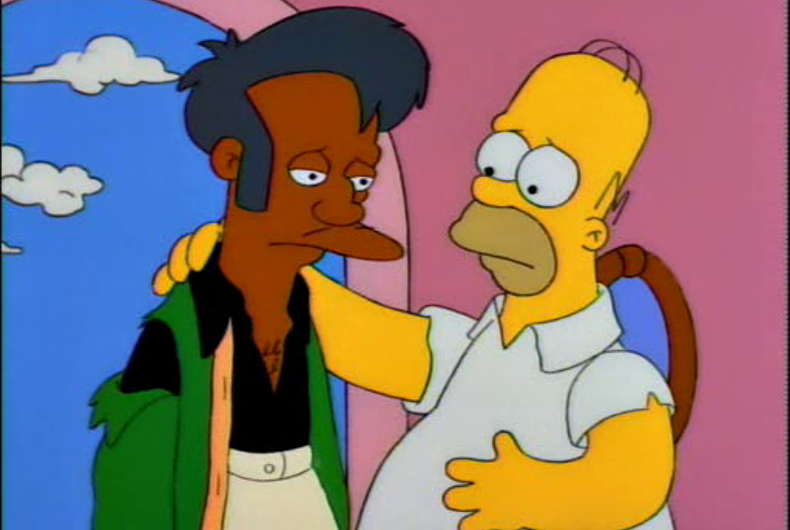 Back in the 1990s, there was a brave, funny, thoughtful animated television show called The Simpsons. It’s hard to believe, given what the show has become — but there was a time when the program tackled difficult issues and took strong moral stands.

For evidence, look no further than the 1997 episode “Homer’s Phobia.”

The show recently made headlines for the first time in many years, following their sort-of response to a controversy over the character of Apu. For decades, Apu has been voiced by a non-Indian actor playing into outdated stereotypes.

After a documentary chronicled the many problems with that arrangement, the show finally acknowledged the controversy without taking much of a stand. A few lines of dialogue on a recent episode acknowledged that the representation of Apu was problematic, but offered no solution.

Compare that to the bold stance of “Homer’s Phobia.” Featuring a guest appearance by John Waters, the episode presented audiences with a gay character while simultaneously attacking homophobia.

At the time that the episode aired, queer characters seldom appeared on television. They were usually tragic or the butt of jokes. But John’s character was happy, openly gay, and loved by most of the Simpsons.

Only Homer disliked him, for reasons he couldn’t quite articulate. The episode made it clear: if you have a problem with gay people, the problem might actually be you.

“Homer’s Phobia” aired just a few weeks before Ellen’s big coming out episode. It was a time when a queer character on television drew firestorms of protest, so it was a brave act for The Simpsons to not only include a gay character but to take a strong moral stand against intolerance.

It was a time when television was unready for gay heroes, and a time when The Simpsons was willing to take a position when it came to social justice.

Now, circumstances seem to have flipped. These days queer characters have become commonplace (though they’re still woefully under-represented), and The Simpsons tiptoes around its own marginalizing of disempowered minorities. If only the show knew now what it clearly knew back then.

If you need an excuse to shop at Sephora, this is it