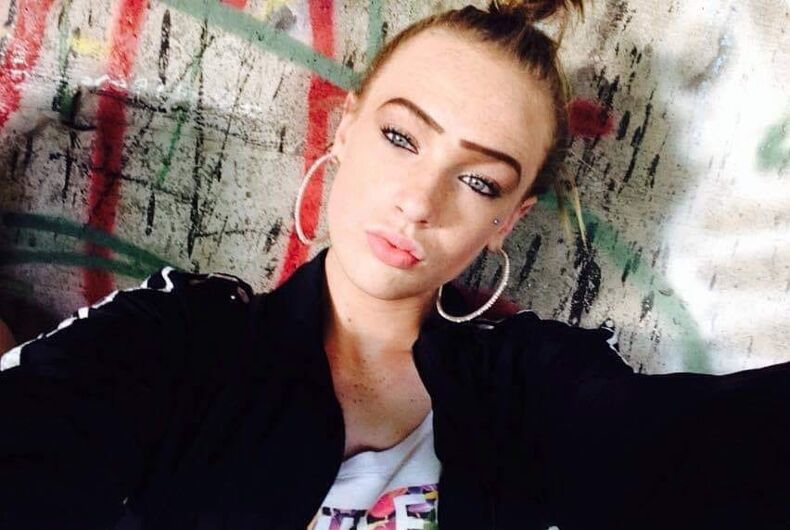 Nikki Kuhnhausen, a 17 year old transgender girl from Vancouver, Washington, went out to “stay with a friend” on June 5. She was never seen alive again.

On December 7, her body was discovered in Larch Mountain in the Clark County area of the state, a few miles north of Portland, Oregon. The Human Rights Campaign reported her as the 24th known transgender or gender non-conforming person to be killed in 2019.

Vancouver Police’s investigation led them to 25-year-old David Y. Bogdanov, who corresponded with the victim over Snapchat. In October, he told police that he met with Kuhnhausen on the night she was last seen, but he left her alone after they had a “conflict”. Authorities stopped believing him when his cell phone data from the morning of June 6 led them to the location of Kuhnhausen’s body.

Prosecutors charged him with second degree murder and he was initially not given bail. They also added on charges of malicious harassment, the former name for hate crime stipulations in the state of Washington.

At a hearing on January 2, however, Judge David Gregerson not only set a bail amount for Bogdanov, he set the amount at $750,000 – less than 1/6 of the $6 million that the prosecutors asked for, if bail had to be set at all.

The ruling prompted several of Kuhnhausen’s friends, family and several activists to start a “Justice for Nikki” chant. Lisa Woods, Kuhnhausen’s mother, told Judge Gregerson after his ruling, “I want to stress that the LGBTQ community is not safe with this monster on the streets.”

“I feel like the justice system just failed my baby one more time – it’s like her being murdered all over again,” she said outside the court room.

Bogdanov told police that he felt “really, really disturbed” by Kuhnhausen’s gender identity while claiming to have kicked her out her vehicle, but they believe he “strangled her to death in a rage of violence” after she identified herself.

Gregerson argued the ruling was appropriate based on other cases and the fact that Bogdanov did not have a criminal history, but local activists refuted that fact with other recent bail rulings, such as one where teenage suspect received a $2 million bail for an attempted murder charge involving a 66-year old victim.

“[Bogdanov] doesn’t deserve to be out on the street. And the judge was wrong. The judge was wrong in this particular case. Nikki Kuhnhausen did not get justice today,” Michelle Bart of the National Women’s Coalition Against Violence and Exploitation told The Columbian.

Supporters of “Justice for Nikki,” wearing pink clothing, are at the #Clarkwa courthouse this morning to attend a bail hearing in the case against David Y. Bogdanov, of #Vanwa, who stands accused of killing 17-year-old Nikki Kuhnhausen. pic.twitter.com/mKy8yk5SGm

According to KPTV, “If Bogdanov does post bail as he awaits his trial scheduled for July, the judge said there will be certain conditions he’ll have to follow, including maximum supervision and no contact with Kuhnhausen’s family.”

The Human Rights Campaign specifically spoke on the lack of support for transgender and gender non-conforming people, especially in the Vancouver, Washington area. “This epidemic of violence that disproportionately targets transgender people of color — particularly Black transgender women — must cease.”

“It is difficult as a member of the trans community … to take part in a process like this, knowing full well that these things usually do not go in my community’s favor,” social worker and activist Devon Rose Davis said to The Columbian. “We’re profoundly disappointed.”

While it hasn’t been reported if Bagdanov has posted bail or not, some are concerned that Bagdanov’s family may raise the money for his bail and take him to Russia, according to The Advocate.

Kuhnhausen’s stepfather, sister and mother Lisa Woods, from left, along with NWCAVE cofounder Michelle Bart, speak to the media outside the #Clarkwa courthouse. Bart said justice was not served for Nikki today. pic.twitter.com/rhI4ldFkUf