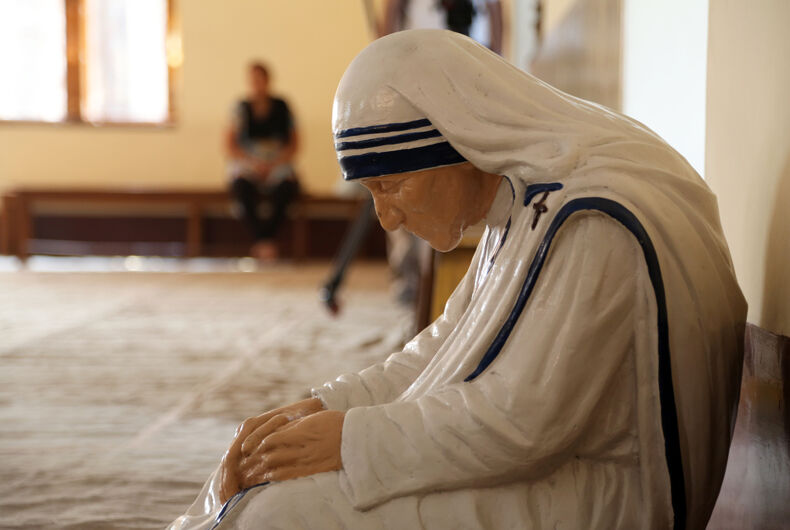 The statue of Mother Teresa in the chapel of the Mother House, Kolkata, India at February 08, 2014Photo: Shutterstock

The former spiritual advisor to Mother Teresa has been accused of raping one boy “more than 1000 times all over the world” in a new lawsuit filed against the Catholic Church.

The Reverend Donald McGuire molested Bobby Goldberg from age 11 the court documents say, adding that he had the boy travel the world with him as his “protege.” Goldberg is now 61.

McGuire was “treated” at a residential center in 1994 and criminally convicted of sexually abusing young boys in 2003. He died behind bars in 2016.

Mother Teresa wrote a character reference for McGuire when he was in treatment, saying, “I have confidence and trust in Fr. McGuire and wish to see his vital ministry resume as soon as possible.” Her nuns swarmed the courtroom during McGuire’s trial wearing badges that said “I support Father McGuire.”

Goldberg says that McGuire gave his single mother a job and would use that as leverage to keep him compliant with his sexual demands. He said the priest would lock him in a room for hours if he refused to “perform a menu of sexual favors” on him.

During McGuire’s trial, Goldberg was a character witness for the pedophile priest, but he says listening to the stories from victims helped him realize that he too had been manipulated and groomed.

Mother Teresa was a celebrity and kept company with other celebrities. Her meteoric rise landed her in the foyers of mansions and at the dinner tables of world leaders. She was able to parlay her reputation for piety and good works into a lucrative fundraising scheme. She raised millions of dollars, ostensibly to fund her charitable organizations.

Faulty bookkeeping, secrecy, and incompetence prevent accurate accounting of these considerable financial resources. Following her death, some accounts were discovered in traditional tax havens, all brimming with cash, their origins and purpose unknown.

While it’s impossible to ascertain the motives behind these financial discrepancies, while some of those in her care suffered and eventually perished from curable diseases in her houses for the dying, no expenses were spared when it came to Mother Teresa’s own health; even the smallest medical complaint led to immediate hospitalization at a top-notch hospital in the United States.

Not only were her celebrity acquaintances great funders, but some served her political goals to improve Catholic standing as well. She famously applauded Baby Doc Duvalier, a totalitarian dictator in Haiti, for his compassion.

Mother Teresa never condemned McGuire for molesting numerous young boys in his care. She was made a saint by the Catholic Church in 2016 – the year that McGuire died in prison.

Transgender taxi driver shot to death in his own car