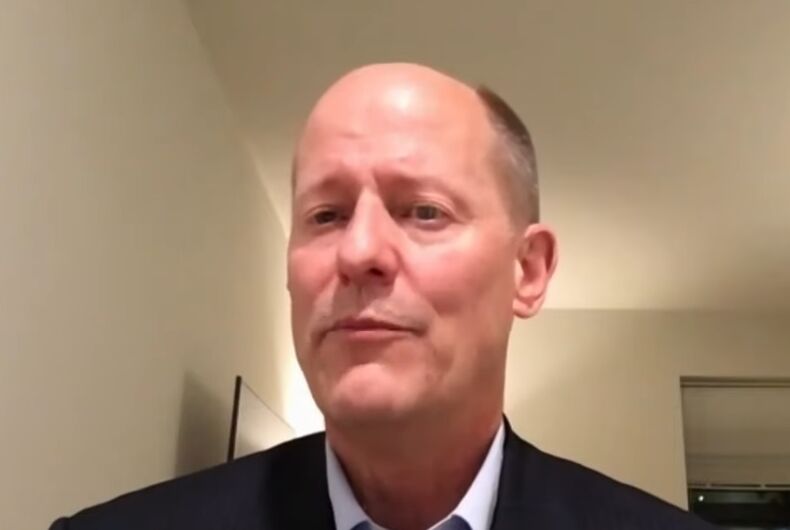 Minnesota Senate Majority Leader Paul Gazelka spoke at length in an interview about the importance of keeping conversion therapy legal, arguing that people turn gay because of bad parenting or sexual abuse.

Gazelka appeared on the Truth & Liberty podcast, which is co-hosted by televangelist Andrew Wommack, who supported Uganda’s Kill The Gays bill.

Gazelka started his response by lying about the law, saying that it would ban both counselors and pastors from talking to young people about their “sexual feelings of identity.”

He said that if a minor went into a counselor’s or pastor’s office to talk about “unwanted same-sex attraction,” the law would tell the professionals “don’t offer any help, just, you know, wing it.”

That’s not what the proposed conversion therapy ban in Minnesota said. It only applied to state-licensed mental health professionals (not pastors) and would only ban them from attempting to change a patient’s sexual orientation – they can still offer real help for young people struggling to accept themselves.

Gazelka went on to say that homosexuality is a sin and that many people find “total freedom” from homosexuality through counseling.

He then told a story that someone told him about “a lady that was lesbian.”

According to Gazelka, the speaker said, “Before you judge her, let me just tell you her backstory. … He said she was chained to a toilet as a like 2-, 3-, 4-, 5-year-old girl and raped by her dad, for years and years. How do you think she’s gonna feel? In other words, he’s trying to get you to realize that there’s a deeper backstory.”

In a separate anecdote, Gazelka said that a gay man lobbied his office several times. The second time Gazelka talked to him, he asked, “Were you raised by your mom and dad, or was it just your mom?”

“Because a lot of times, same-sex attraction- there’s not a good connection to the biological parent of the same sex.”

“And he says ‘It’s funny to say that, you know, because my — my mom and my grandma raised me.’ The point I’m trying to make is we actually had a conversation that we could talk about the issues around the why and the what.”

The theories that homosexuality is caused by a poor relationship with the parent of the same-sex or is a result of sexual abuse have already been debunked. But conversion therapy is based on the idea that LGBTQ people are profoundly broken by negative developmental experiences, a point of view that Gazelka apparently shares.

Gazelka’s support for conversion therapy is more than political – he sent one of his own children to it. His child Genna, who is non-binary, said that they were sent to conversion therapy as a teen when their parents thought they might be a lesbian.

The therapy was “tantamount to what could be said of torture or sexual torture,” they said.

They said that they were sent to Marcus Bachmann’s clinic. He’s the husband of former Rep. Michele Bachmann (R-MN), and his clinic is known for conversion therapy.

Their parents also encouraged Genna to go to Janet Boynes Ministries, which helps people “who are trapped in the sin of homosexuality and yearn to be set free.”

Gazelka claims that he did not send his child to Bachmann’s clinic for conversion therapy, but just for “healing.”

“The bigoted beliefs Gazelka expressed in this interview are exactly the attitudes that made it so difficult for me to come out and still make it hard for LGBT Minnesotans to simply be who we are,” the party said in a statement. “Paul Gazelka cannot claim to love the LGBT community while fueling the homophobia that causes our community to face heightened rates of depression and suicidal ideation.”

The full interview is below. The part about conversion therapy starts at the 43:45 mark.