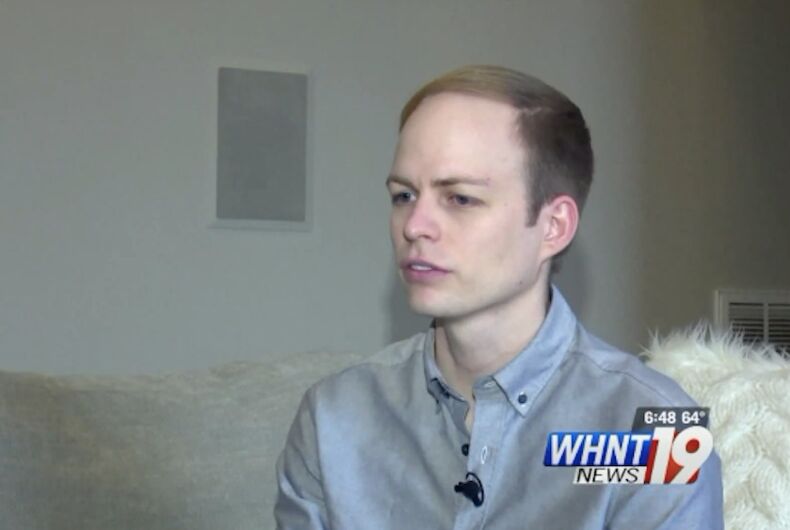 Robby Parker, the superintendent of Madison City Schools in Alabama, has apologized to local gay resident Colin Tomblin and his partner Jason after Tomblin publicly posted home security footage of several James Clemens High School baseball players driving by their house in a truck and shouting, “Fuck the f****ts! Fuck f****ts! You guys are fucking f**s, fuck you!” as another teen laughs hysterically.

The footage was captured at 11 p.m. on Friday, January 10 on the couple’s front door security camera. Tomblin posted the video on Facebook the following afternoon.

Related: Man getting death threats after making a YouTube video where he talked to kids about being gay

In his post, Tomblin wrote, “This is 2020 and behavior like this should not be tolerated. If your kids do this to random strangers, imagine what they’re doing to their classmates and others. This bullying type behavior is exactly why kids are committing suicide.”

Here is Tomblin’s video of the teenagers shouting slurs:

So this happened right before 11pm last night right in front of our home in Madison, AL. A car full of JCHS baseball players thought it would be a good idea to speed by while screaming “fu*k the gays” and “fu*k the fa*gots” at our house. We don’t know these kids and have never had a single interaction with them or done anything to warrant this hate speech and harassment. This is 2020 and behavior like this should not be tolerated. If your kids do this to random strangers, imagine what they’re doing to their classmates and others. This bullying type behavior is exactly why kids are committing suicide.I can’t imagine that Madison City Schools, James Clemens High School, or the JC baseball team would condone this type of behavior.

Madison City Schools spokesman John Peck said in a statement issued on Wednesday that the behavior was “regrettable and not a reflection” of the school system’s values.

“The incident happened over the weekend, not on school property nor during a school-sanctioned activity,” Peck said. “Having said that, Madison City Schools does not condone intolerance of any sort by its students or employees.”

Clemens High School Principal Brian Clayton also said that he addressed the incident with students. It’s unclear if any disciplinary action was taken.

In a follow-up comment this past Tuesday, Tomblin wrote, “Since making this post, we have heard from the school system. They made it clear that they do not condone this type of behavior and will be taking action.”

Tomblin discouraged commenters from publicly naming the teens and added, “I would like to thank everyone for their support. I hope bringing awareness to this issue brings positive change to this type of behavior in the schools.”