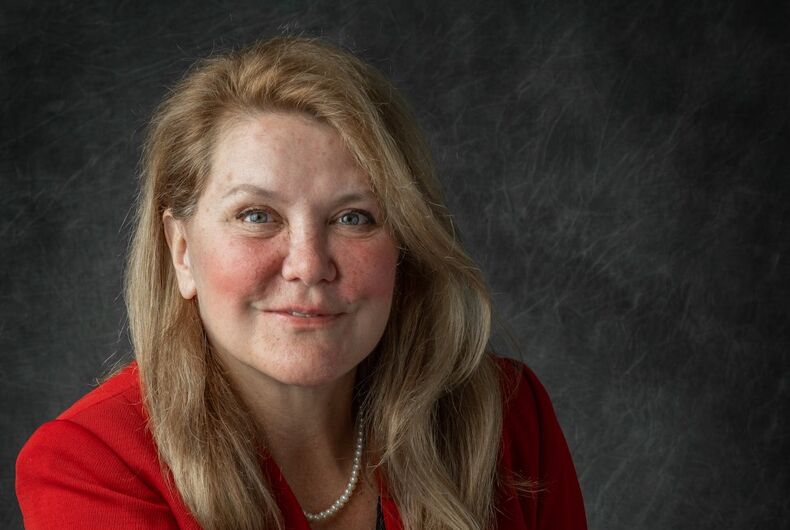 An out gay Democrat running in Mike Pence’s home state may sound like a challenge that only a wunderkind like Mayor Pete could take on, but that’s exactly what Sabrina Haake is aiming to do.

The lesbian attorney wants to be the next Congresswoman of Indiana’s 1st congressional district – which consists largely of Gary and its surrounding suburbs in the Northwest portion of the state. The district has been uniquely Democratic for decades – in fact, current Democratic Representative Peter Visclosky has held the seat Haake’s fighting for since 1985. This year, though, Visclosky announced he will not be seeking reelection.

Related: Democrats could grab a Senate seat in Kansas, thanks to this former Republican

Still, Haake, who announced her candidacy in December, has her work cut out for her leading up to the May 5th primary. At least seven other candidates have joined the race, including State Rep. Mara Candelaria Reardon and Mayor Thomas McDermott Jr. of Hammond, Indiana.

Haake and her wife, Jill, live in a neighborhood in Gary called Miller Beach – described by the candidate as much queerer than people would expect. Ten years ago, she founded the LGBTQ GLEAM – which stands for Gays and Lesbians and Everyone Around Miller – which is a ‘social and political networking organization’ mostly putting together social engagements such as potlucks and house parties.

She was also a member of Open Hand Chicago, a program that delivered meals to people living with AIDS and HIV. “Our clients were shut-in, lonely, and discarded by society,” Haake writes of the Open Hand experience on her website. “Sometimes I was the only person they’d see that day, and they liked the company as much as they needed the hot meal.”

Haake has been outraged by the war the Trump Administration has waged on the LGBTQ community. “I don’t even know where to begin with the Trump Administration and LGBTQ stuff,” she told LGBTQ Nation. Among many other of the administration’s actions, she’s horrified by their attitude toward the trans community, and by its staunch position that Title VII of the Civil Rights Act does not include gender or sexual orientation. “So obviously, [fighting] LGBTQ discrimination is huge to me,” she said.

In 2019, Haake drafted a revised non-discrimination policy for the city of Gary that includes sexual orientation, though she is still fighting for the city to update it on their website.

Nevertheless, Haake is not running on her sexuality. “I don’t think that’s a qualification,” she says, “I think that’s part of who I am as a person.” The major focus of her campaign is not LGBTQ issues, but climate change. She hopes to shift the focus of the conversation surrounding the climate crisis, believing people are more likely to listen if they understand the economic benefits of supporting renewable energy.

According to Haake, studies show that renewable energy has the potential to create 40,000 jobs in Northwest Indiana alone, but there isn’t enough money being invested in it in the region. “Everyone we know can drive electric cars, but at the end of the day if we don’t get industry to convert, it won’t make any difference,” Haake said. “It’s just reality. Industry needs federal resources to convert. We can’t ask steel to just invest billions and trillions into infrastructure upgrade.”

The way to gain these resources, she explained, is to declare a federal emergency on climate. “I want it to happen – fast,” she said.

Though Haake is not a career politician, she does have some political experience. After graduating with a BA in Political Science from the University of Southern Indiana, she became a legislative intern for the Indiana House of Representatives. She spent a year as a Governor’s Fellow, and afterwards attended night school at the Indiana University School of Law, while simultaneously working for the Indiana Criminal Justice Institute. Haake then became the general counsel for beverage distributor Marbo, Inc. and now, she is a private attorney, representing the City of Chicago’s Board of Education, among other clients.

Education is, in fact, Haake’s other passion. She is very open about her own abusive childhood and said she is where she’s at today because someone recognized her trauma and helped her through it. Haake wants to evaluate kids as they enter first grade, and assign someone to help any student who shows signs of trauma.

“I believe very strongly that the gap in our education scores is because of trauma,” she said. “If kids grow up in traumatic homes, their cognition is affected. We can help them deal with that, but first we have to recognize it.”

She speaks candidly and honestly about her childhood. “When you hide something, you don’t mean to, but you stigmatize it,” she said. “I think it’s important to share that truth because it might let some other kid know they’re not alone.”

Haake believes her life experiences give her the unique perspective needed to succeed in Congress. The things that have happened to her, she said, make her far more qualified than those with years of political experience.

“Having a difficult background,” she said, “Makes me like most people.”