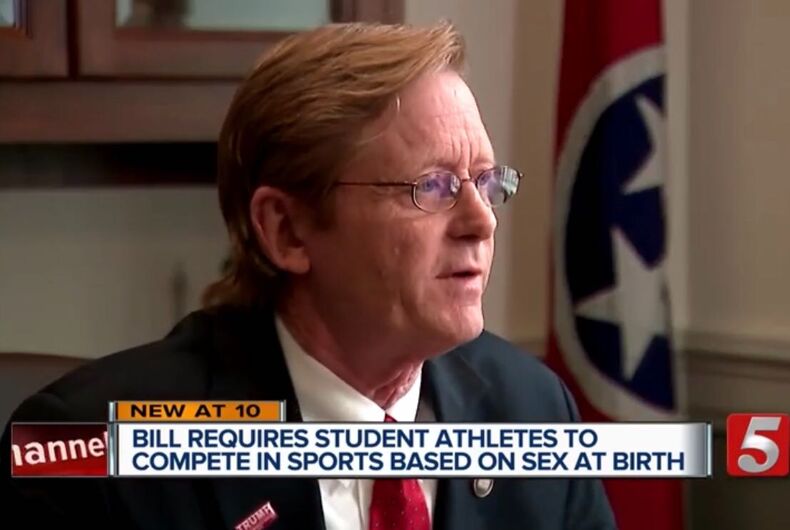 Bruce Griffey, the freshman state representative for Paris, Tennessee, introduced House Bill 1572 – which, if passed, will require “transgender students to participate in the sports categories based on the sex on their birth certificate.”

Griffey. whose state government profile notes his involvement with the NRA and Tennessee Firearms Association, claims he just wants the state’s school systems to “be fair”, and that he isn’t being transphobic or anti-LGBT in introducing this proposal.

“There’s no ill will intended toward anyone regarding this legislation. What it’s simply trying to do is, I think science and experience and just society,” he told Nashville’s News Channel 5 while wearing a Trump pin.

Griffey claims that “we all know that traditionally, males generally have bigger hearts, bigger upper body strength, and that can give them a genetic advantage when competing against women in a number of sports” – something debunked already by the likes of Athlete Ally and assumes that all trans athletes will be fully developed members of the male sex.

“If we’re going to begin blurring the lines, we’re really defeating the purpose of having fair competition to begin with,” the politician claims.

According to The Tennesseean, Griffey also introduced a law to force trans students to use bathrooms based on their sex at birth, rather than their present gender identity. “None of the 13 bills Griffey introduced during the 2019 session passed,” they report.

Chris Sanders of the Tennessee Equality Project calls the bill “insulting to trans youth” and what his organization considers a part of “2020[‘s] slate of hate bills.”

“It is an attack on trans students; their state government should be serving them and not seeking ways to marginalize them further.”

If passed, the bill would punish schools by imposing “a fine of up to $10,000 on any school or state official who knowingly violates the ban, and the official accused of violating it would have to leave their office” in addition to giving up any chance of holding a public school position for five years. The school would also be banned from receiving public funds in the immediate future, or competing in statewide sports competitions, according to CBS Affiliate WVLT Nashville.

The myth that trans women have an advantage over cisgender women in sport is pervasive, despite the fact that numerous LGBT+ sporting organisations have repeatedly debunked the claims….Athlete Ally pointed out that “there is no evidence at all that the average trans woman is any bigger, stronger, or faster than the average cisgender woman, but there is evidence that often when athletes lower testosterone through hormone replacement therapy, performance goes down.”

View the News Channel 5 news report on the incident here.

A history-making lesbian mayor in Colombia has been sworn in