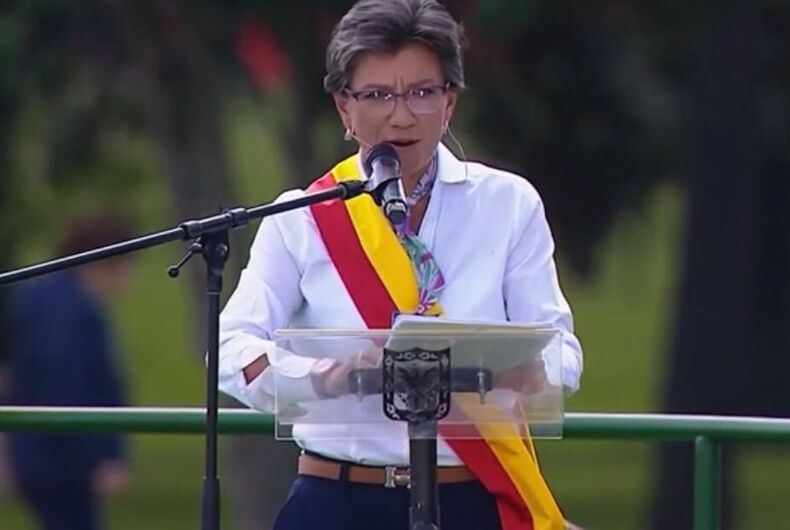 Claudia López, the lesbian mayor of Bógota, gives a speech following her inauguration on January 1, 2020. Photo: Screenshot via YouTube

Claudia López was inaugurated as the mayor of Bogotá, Colombia, this Wednesday. She is both the first woman and first openly gay person to serve as mayor within any major South American country, according to The Washington Blade.

According to CNN, the mayor “ran on a platform of improving public education, supporting infrastructure, and fighting corruption in Colombia’s largest city. She has long been known for anti-graft activism…”

The former Senator and Presidential candidate was elected on October 27, 2019 under the Colombian Green Alliance Party. Her career started in the 1990s, and she has also worked at the United Nations, as a Secretary of Social Action, and a political columnist. She holds a Master’s from Columbia University in New York, and a PhD from Northwestern. She also gave a TEDx Talk at Yale University in 2011 on ‘The Power of Voice’.

López married her partner, Sen. Angélica Lozano, in December 2019 after a lengthy engagement, following same-sex marriage’s legalization in Columbia becoming legal in 2016. Lozano, who is bisexual, became the first out woman to be elected senator in the country in 2018. According to The Blade, López was not out when she was elected to the Senate in 2014. A lawsuit in September of that year made the public aware of her relationship with Lozano.

“Colombia is the only country in which the same political families from the 20th Century are still governing in the 21st Century,” López told CNN the day after she won election in October. A tweet that reads, “Welcome to the 21st century!” appears to call back to that assessment.