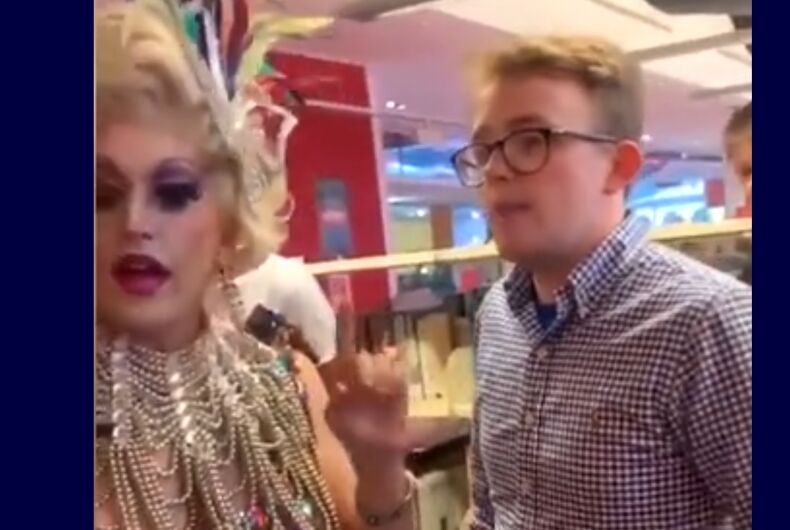 A gay student who protested against a Drag Queen Story Hour in a viral video has been found dead in an apparent suicide over the weekend.

Wilson Gavin, 21, led a group of 15 to 20 protestors from the University of Queensland’s Liberal National Club (the Liberty Party of Australia is center-right) this weekend in what was called an “aggressive” protest against a Drag Queen Story Hour being held at the Brisbane Square Library in Australia.

“They entered the even chanting and scared the children,” said event organizers Rainbow Families Queensland last week. “Some parents got them outside the room where they continued to chant loudly.”

The protestors chanted “Drag queens are not for kids” and accused the event of “indoctrinating” children with “radical gender theories.”

Video and images of the protestors went viral over the weekend, and Gavin was prominently featured in them.

Gavin was found dead early this morning in Brisbane. Paramedics who attended the scene said that he died due to unspecified critical injuries, according to the Star-Observer.

Gavin got some national media attention two years ago when he was a 19-year-old gay spokesperson for the organization “Our Vote. Our Voice,” a group that encouraged people to vote “no” in Australia’s mail-in referendum on marriage equality.

“Marriage has always been an institution between a man and a woman,” Gavin said in a radio interview at the time.

“More deeply, I’m just worried about the negative ramifications that can come directly from same-sex marriage,” he added, which he claimed would forces churches to perform same-sex marriages and children to learn about LGBTQ people in schools.

Johnny Valkyrie was one of the drag performers at the storytime event that Gavin disrupted this weekend. He posted a message to Facebook about Gavin’s death.

“My heart goes out to the family and friends of the affected,” wrote drag performer Johnny Valkyrie. “If the family are reading this please know that I support you, and I am here to gather support and I know you are good people.”