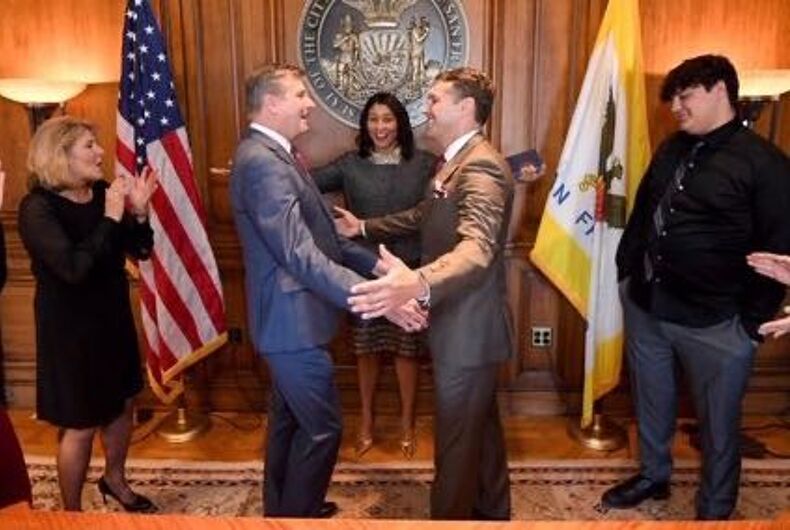 Rick Welts' and Todd Gage's hugging after their marriage ceremony, overseen by London Breed.Photo: via Twitter

The Golden State Warriors’ President and COO, Rick Welts, tied the knot with his partner Todd Gage at San Francisco’s City Hall this past Friday. The ceremony was presided over by San Francisco Mayor London Breed.

Welts came out in 2011, while he served as the president and CEO of the Phoenix Suns and Phoenix Mercury. He resigned his post four months later and was hired by the Warriors that October where he “oversees all business-related operations for the Warriors.” Gage is a flight attendant, according to his Twitter.

“At 11am today in the Mayor’s office at SF City Hall, Mayor [London Breed] married Rick Welts and Todd Gage,” Welts’ tweet says. “It was a good day, nine years in the making!”

The accompanying picture features Welts – who turns 67 next week – and Gage about to hug in front of Breed and other guests at the ceremony.

At 11am today in the Mayor’s office at SF City Hall, Mayor @LondonBreed married Rick Welts and Todd Gage. It was a good day, nine years in the making! pic.twitter.com/NiiVN255eG

Welts oversaw the groundbreaking development of the Warriors’ new arena – the Chase Center in downtown San Francisco – and under his tenure the team has won three NBA championships. He also holds the distinction of being the only person to earn a championship in all three of the NBA leagues – the NBA, WNBA, and the NBA G-League.

Prior to San Francisco and his nine years in Phoenix, Welts worked in the NBA league office for nearly two decades, where he became third in command under Commissioner David Stern. Outside of that, Welts was the mind behind the NBA’s All-Star Weekend events and the marketing strategist of the 1992 USA Olympic “Dream Team.”

Welts was inducted into the Naismith Memorial Basketball Hall of Fame in 2018 and was also the recipient of GLSEN’s Inspiration Award of 2011.

In 2016, Welts was reported as an influence behind moving the NBA’s All Star festivities away from Charlotte because of North Carolina’s HB2 bill, which banned transgender people from using the bathroom that aligns with their gender identity. Welts’ influence helped finalize the NBA’s decision, which cost the state at least $100 Million. Part of HB2 (repackaged as HB142) was shot down in court this past summer.

Democrats could grab a Senate seat in Kansas, thanks to this former Republican