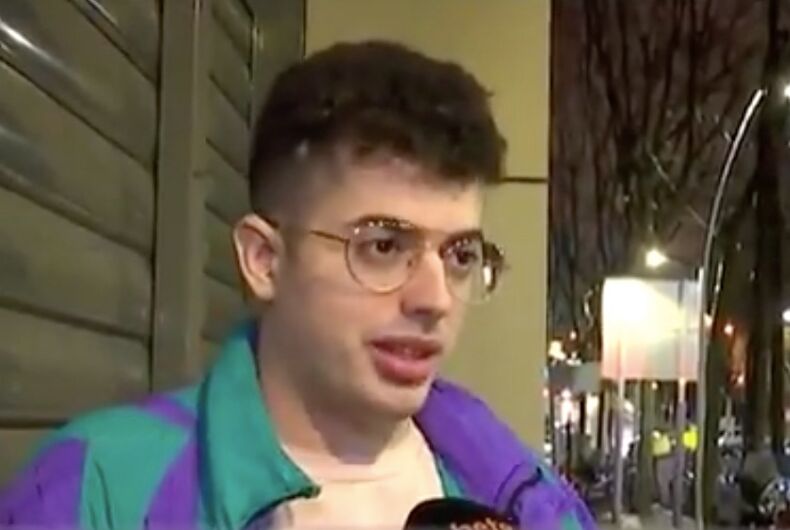 On the evening of January 26, an unknown woman in Barcelona attacked a man named Edgar Aragall with pepper spray after seeing Aragall holding his male friend’s hand on the subway. The two friends had been out dancing.

The woman asked Aragall if he was gay and began yelling anti-gay slurs at him. When a female passer-by stepped in to defend Aragall and his friend, the assailant and her partner began striking out at the woman.

Related: Watch this woman suddenly demean & spit on a gay man as he tries to ride the subway

Aragall says he began looking for a security guard to help stop the fight, but he couldn’t find one. Soon after, the homophobic woman reached into her pocket and began spraying Aragall in the face at point-blank range.

He experienced extreme irritation in his eyes, face, and stomach and had to visit the hospital for treatment immediately after. Meanwhile, his female attacker and her partner disappeared and still haven’t been found. The regional Mossos d’Esquadra police forces are investigating.

Here is a video of Aragall discussing the attack. The video is not in English.

This isn’t the first time a queer couple has been recently attacked on a Barcelona subway.

Last July, a woman pushing a stroller went absolutely bonkers after seeing two lesbian women kiss. She said, “D**e, d**e… You disgust me, I have a gay brother, but he doesn’t kiss in front of me because he respects me.”

During the attack, which was recorded on video, the homophobic woman referred to her own brother as “a f****t.”

The lesbian woman who recorded the attack said, “Insults and threats continued for 10 minutes in the middle of a wagon full of people. Nobody moved a finger. It is very easy to put [on supportive] ‘badges’ on the day of Pride, but LGBTQIA + people continue to suffer daily violence with this type of aggression.”