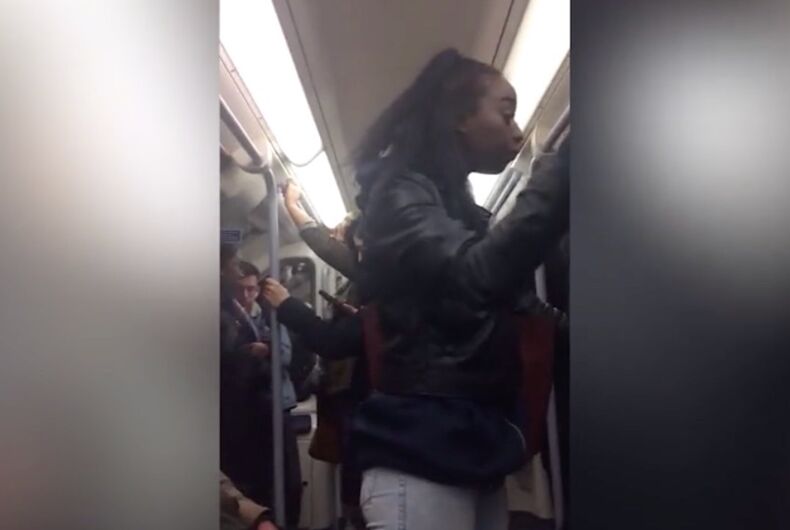 This woman began to verbally and physically assault a gay man on the London UndergroundPhoto: Screenshot

A bystander on the Jubilee line of the London Underground caught a homophobic attack on film as one rider used anti-gay slurs and spit on another passenger.

The video of the apparently intoxicated woman, originally reported by the Daily Mail, was provided by an unnamed onlooker who said that the attack was unprovoked..

The short clip shows the woman shouting at a passenger while several other riders look on.

At the beginning of the clip, she tells the man, “because you’re gay I’m gonna be like, ‘nah, he’s gay, just let him go?’ No! Because you’re gay, even more, I’m going to violate you.”

Related: Three drunk trans women were caught on video brutally beating up a man in a subway station

One onlooker interjects at this point, telling her to “shut the f**k up,” but she persists.

She then attempted to grab his phone out of his hand, at which time the rider kicked her in the shin. She responded by spitting on him, then walking away.

“He kicked her and then she spat on his face, the man was still very calm, other passengers gave him tissue to clean up his face and he was grateful for that,” said the person who provided the footage to the Daily Mail.

They added, “after the spat, she tried to leave the carriage but a woman confronted her, telling her to stop abusing the man.”

The incident took place between the London Bridge and Green Park stops on Monday morning around 5:30 a.m.

Said a spokesperson for the British Transport Police, “We take all reports very seriously and would ask anyone who witnessed what happened, or who has any information, to contact BTP by texting 61016 or calling 0800 40 50 40 quoting reference 680 of 03/05/19.”