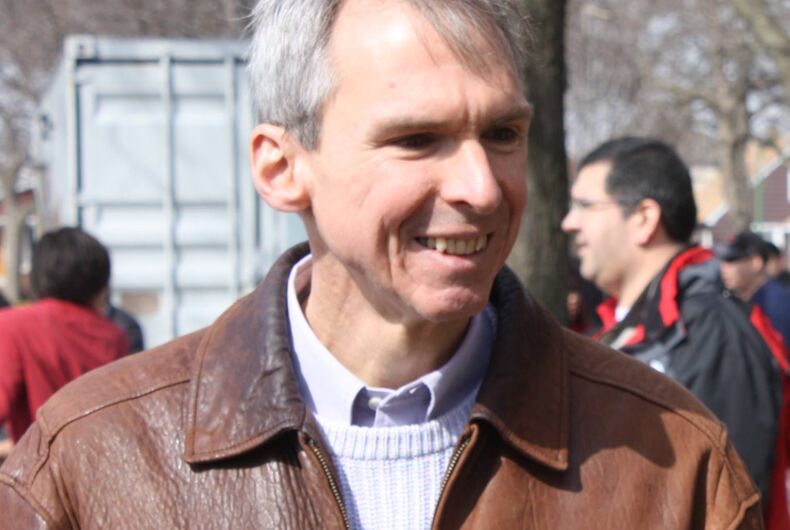 When it comes to LGBTQ rights, Illinois Congressman Dan Lipinski is the worst. Literally.

As the Equality Act comes to the floor of the House for a vote, Lipinski is the only Democrat who doesn’t support the legislation that would enshrine nondiscrimination protections for LGBTQ people into national law. The legislation has Republican co-sponsors and national polling shows the majority of Americans support it.

While many progressive advocacy groups for different issues worked together to recruit and support a primary challenger, he won the first round and cruised to victory in the general election because his Republican opponent was a self-described Nazi. Even fellow Illinois Democratic Congresswoman Jan Schakowsky endorsed his primary opponent.

Now the coalition is gathering to primary Lipinski again and shift the solidly Democratic district to a progressive candidate. And they’re starting early this time.

MoveOn, a liberal group is leading the charge with a new video highlighting how polar opposite Lipinski is from his fellow party members. As the names of other members of Congress scroll by, Lipinski is the obvious standout when it comes to LGBTQ rights.

“Dan Lipinski is one of the worst Democrats in Congress. He voted against the Affordable Care Act, has consistently opposed a woman’s right to choose, has opposed LGBTQ equality, and has sided with Donald Trump in support of his horrific anti-immigrant agenda,” explained Rahna Epting, chief of program at MoveOn.

“That’s why MoveOn members overwhelmingly support Marie Newman—who earned 91 percent of the votes cast amongst the 7,500 MoveOn members in Illinois’ 3rd congressional district. We are proud to support and endorse Newman, who will be a progressive voice to represent the values of Illinois’ 3rd district voters in Congress.”

Jerry Falwell Jr. denies ‘racy’ photos are of himself. Doesn’t mention his wife or the pool boy.