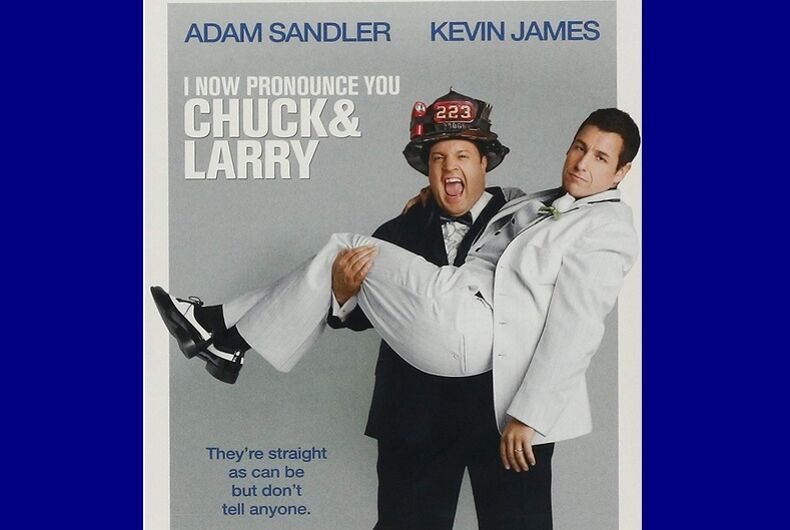 The DVD of "I Now Pronounce You Chuck and Larry."Photo: Universal Pictures

A Democratic alderman in Chicago said that he is concerned about a measure intended to fight discrimination against LGBTQ people because he’s worried about fraud… after watching the 2007 Adam Sandler movie I Now Pronounce You Chuck and Larry.

But the idea has run up against opposition from some Democrats on the city council, including Alderman Walter Burnett, who cited the Adam Sandler movie as a reason to believe that LGBTQ set-asides would be ripe for fraud.

“I think about that movie about the two firemen where they were faking like they were gay… to get benefits. That’s a concern of mine. How do you distinguish that?” Burnett said.

In I Now Pronounce You Chuck and Larry, Adam Sandler and Kevin James are straight firefighters who get married in order to help James name his children as beneficiaries on his life insurance policy, which is not a thing. The government investigates their sham marriage, so they start pretending to be gay (by buying Q-Tips and a Liza Minelli album) and are outed to other firefighters.

The movie – which Vice described as “wall-to-wall gay panic humor” – ends with James and Sandler in court, accused of being straight because Sandler has female exes (because bisexual men don’t exist). The two main characters learn that it’s bad to use the word “f****t,” they grand marshal a Pride parade, and in the end, they can keep the benefits even though everyone finds out that their marriage was fraudulent.

Needless to say, the movie was made by and for straight people and is not an accurate depiction of LGBTQ life in the U.S.

Burnett went on to say that set-asides for women created the same possibility of fraud because white women could say they own a business as a front for a white man.

“That was the same concern that some African Americans had about white women being considered a minority,” he said. “And after that, we started getting fraud where white women were fronting for white males. We found a lot of corruption.”

Alderman Jason Ervin brought up the same concern, saying that LGBTQ business set-asides would be “creating a situation where individuals could fraudulently assert themselves to be something that they’re not in order to get a financial gain.”

He said that sexuality is based on “subjective qualifiers,” implying that anyone can claim an LGBTQ identity while racial identity rests on something objective that cannot be manipulated.

The city already uses a number of methods to reduce fraud when it comes to set-asides for minority- and women-owned businesses, including site visits, interviews with a business’s officers, and announcements in the local paper.

“In 20 years of certifying with every major Fortune 500 company that you can think of, we’ve yet to come across a situation where there was fraud of any kind, misrepresentation of any kind, because the certification process is so thorough,” Lovitz told the Chicago Sun-Times.

He said that California saw a 240% increase in registered LGBTQ-owned businesses after the state launched a similar program.

“These weren’t people who picked up and moved there,” he explained. “These were businesses who were living there the entire time who said, ‘You finally see me.’ You called me out. I’m willing to share my data.”

“The L Word: Generation Q” has already been picked up for a second season