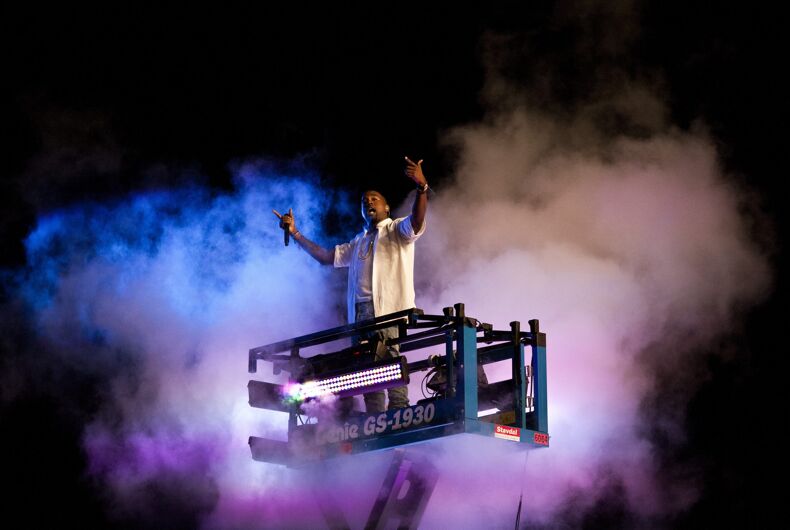 Kanye West performs at the Way Out West festival on August 13, 2011 in Gothenburg, Sweden.Photo: Shutterstock

Rapper Kanye West announced he will appear at Awaken2020, a stadium-sized prayer rally hosted by some of the nation’s most anti-LGBTQ religious conservatives.  After West’s announcement so many people rushed online to get free tickets to the event, the group’s website crashed.

West, who’s erratic behavior has seen him suddenly becoming a rightwing Christian and devout worshipper of Donald Trump, has been pushing his new gospel album recently. One of the songs is an ode to Chick-fil-A, the fast-food chain most frequently identified with religious controversy over LGBTQ rights.

Related: Are Trump’s new evangelical pals a secret back channel to Russia?

The Arizona event will feature Dominionist preachers like Lou Engle and Cindy Jacobs. Dominionists are part of the New Apostolic Reformation (NAR) movement that seeks to bring about a theocratic government. NAR considers those with different views to be infidels who are under the influence of demonic forces.

NAR’s core political manifesto is the “Seven Mountains Mandate.” This philosophy instructs “Bible-believing” Christians to seek control of seven key sectors of society known as “mountains”: Education, government, media, business, arts & entertainment, religion, and the family. Dominionists believe their church must prevail because these areas are currently occupied by “darkness.”

Engle, for example, has taught followers that “the church’s vocation is to rule history with God.” Jacobs, similarly, has said, “The government of God must be established.”

Both Engle and Jacobs regularly make bombastic claims about their spiritual abilities, claiming they are “prophets” and can heal the sick and raise the dead.

Engle has said America has become like Nazi Germany because of gay rights. He helped fan the flames of hate in Uganda at a time when this nation was debating whether to enact the infamous “Kill the Gays” bill.

Another luminary in the NAR world is Jacobs, who was widely mocked after she claimed that thousands of birds and fish were dying in Arkansas because Don’t Ask/Don’t Tell was repealed.

Trump has repeatedly met with both Engle and Jacobs as part of his evangelical advisory group and “blessed” the president for his obedience to enacting their social agenda.

NAR has been intimately tied to Russia and has a deep kinship with Putin bordering on hero worship. The movement has supported the country’s violent crackdown and attempted suppression of LGBTQ people.