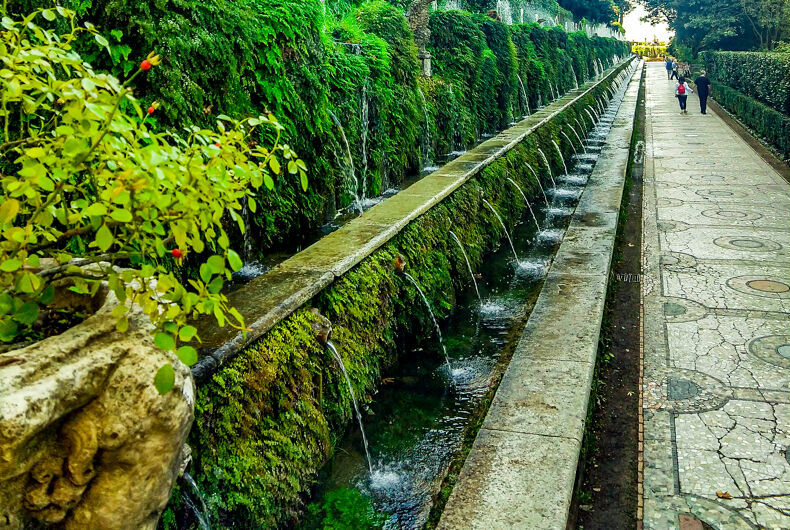 Unlike the Trevi Fountain, Villa d’Este really was this peaceful.Photo: Michael Jensen

We’re a same-sex couple who loves to travel so much that three years ago, we sold our house, and now we travel the world full-time, working remotely along the way.

But we’ve noticed something depressing about a lot of the world’s most famous tourist destinations: they’re often overwhelmed by crowds.

Related: That time our plane caught on fire over the Atlantic

This feels like something new. Years ago, we visited Rome’s famous Colosseum and nearby Roman Forum. Because it was late in the day, and late in the year, we had both areas almost entirely to ourselves. You didn’t even need a ticket to the Forum, which was basically just a big city park.

Last October, we returned to Rome to find that Italy has instituted a rigid reservation system for both attractions, which are now fenced off and have large areas off-limits except to special ticket-holders. Even with a reservation system, both sites were inundated with people. Ditto the Trevi Fountain, formerly a beautiful place to sit and reflect. Now basically a mosh pit of people trying to Instagram their visit.

Seriously, there are fewer people in Times Square on New Year’s Eve. And this was in October, which was traditionally the low season for most European travel destinations.

Italy almost certainly had no choice but to put some limits on access to these sites. There are more humans than ever on Planet Earth, and a lot of these people are choosing to travel. Thank rising incomes for that, along with discount airlines, travel television shows, and, well, Instagram. Plus, a lot of people are specifically choosing to travel now before the world is destroyed by climate change or sheer idiocy.

Yes, this is a thing. We sometimes think this way ourselves.

Anyway, the Colosseum ain’t getting any bigger. We couldn’t help but wonder: if it was this bad in October, what was it like in July and August, the height of the tourist season? Some new levels of hell that even Dante couldn’t envision?

On a recent visit to Pisa, we were shocked by the hordes of people assembled around the famous Leaning Tower.

(Honestly, seeing six hundred people unironically pretending to hold the tower up in their selfies was almost interesting as the building itself.)

And every single day, some thirty thousand people try to see Leonardo da Vinci’s famous Mona Lisa in Paris — so many that the Louvre Museum must now funnel people past in long, narrow barriers that never get closer than twelve feet to the painting, which is itself only two and a half feet tall.

To the surprise of no one who’s actually visited it, the Mona Lisa is consistently rated the world’s most disappointing tourist attraction.

Look, we get it. You go to London, you want to be able to say you saw the Changing of the Guard at Buckingham Palace. Ditto for the Space Needle in Seattle, or the Empire State Building in New York City, or the Taj Mahal in Agra, India.

These days, if a place is truly world-famous, you simply have to expect massive crowds. (Though it’s worth noting that on a recent visit to the Greek city of Olympia, we learned that the philosopher Epictetus was complaining about crowds all the way back in the year 108 AD.)

Some of these places do live up to their hype. The Acropolis in Athens is so majestic and historic that it will give you chills, even if it means waiting in a long line to feel them. And we’ll never tire of wandering Barcelona’s famous Las Ramblas, stopping at the bustling La Boqueria public market for a bite to eat.

So go to the famous places, and take your damn selfie, even if it deceptively edits out the massive throng of tourists taking the exact same photo.

But here’s something we think you should consider: the most interesting places we’ve visited were places we’d never heard of before we happened upon them.

In terms of our preference, we liked the Ring of Kerry the least. For the life of us, we couldn’t figure out why it was famous.

We liked the Dingle okay, but didn’t quite get swept away.

And we absolutely loved the Beara Peninsula, especially remote Dursey Island, population six, which is connected to the mainland by Ireland’s only cable car.

On a recent road trip through Armenia, we made a point to see the famous Khor Virab monastery not far from Mt. Ararat in Turkey. But the highlight of our trip turned out to be the barely-marked Trail of Ancient Monasteries near Dilijan — a collection of forgotten buildings that look like something out of Indiana Jones — which we happened upon by accident.

Our two favorite destinations in Italy are ones you may never have even heard of: Villa d’Este, a Renaissance garden full of more than one hundred different fountains in the small town of Tivoli outside of Rome, and the Sassi de Matera in Southern Italy — a vast ancient city made of white stone that is possibly the oldest continuously occupied place on Earth.

And these places we loved? We had them almost entirely to ourselves. The afternoon we hiked the Trail of Ancient Monasteries in Armenia, we saw two other people. We were the only tourists that day we spent on Dursey Island in Ireland.

That’s the other thing that seems to be true about travel in 2020: more people than ever are doing it, but everyone seems to be going to the same six places.

Crowds suck, and no matter what Epictetus thought, they really are getting worse. Part of the reason we travel is to immerse ourselves in different cultures and to reflect on the history of the world and our place in it. But it’s impossible to reflect on anything when you’re being jostled by crowds on all sides.

So step off the beaten track. Be a contrarian. Drift a little. After two years of continuous travel, here’s one thing we know for sure: the best experiences we’ve had were the ones we never imagined when we first set foot outside our door.