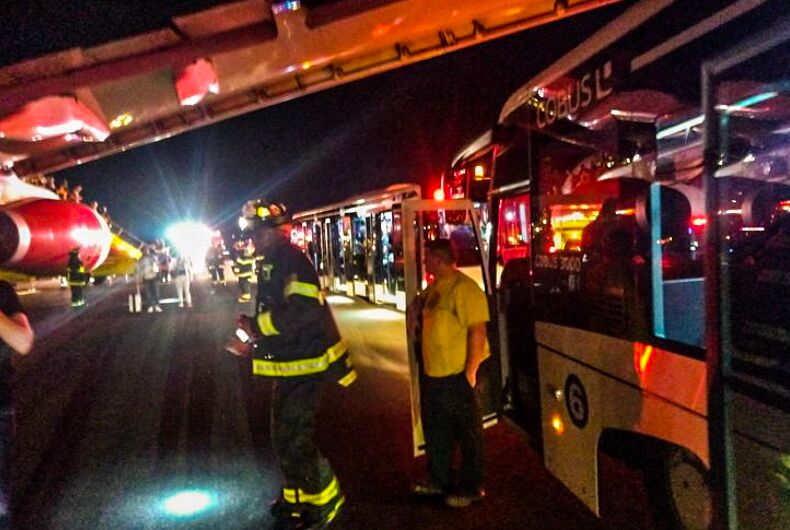 Brent and Michael's plane caught on fire and had to be diverted back to the United StatesPhoto: Provided

We’ve been doing a lot of traveling in the two years since we left Seattle to become digital nomads, and most of it has gone off without a hitch.

Of course, there have been exceptions. Like earlier this year, when our plane across the Atlantic caught on fire.

Ironically, earlier in the day, Brent had tweeted a quote from The Lord of the Rings, something Bilbo says: “It’s a dangerous business, Frodo, going out your door.”

And Michael had tweeted back, “That’s an ominous thing to post right before getting on a plane.”

It had been a last-minute flight, so we hadn’t been able to get seats together. And once we boarded and the plane was climbing, Brent thought the same thing he thinks every time he travels by air: This is so unnatural, being propelled up into the sky inside this massive metal machine that weighs hundreds of thousands of pounds.

But then he remembered what Michael, a former flight attendant, always says: “Airplanes are easily the safest way to travel. We were in far more danger in the taxi on the way to the airport.”

On one side of the plane, Michael pulled out his Kindle and caught up on some reading. On the opposite side, Brent opened his laptop and started doing some work.

A half hour into the flight, somewhere out over the Atlantic, we both thought we smelled smoke. The flight attendants must have burned dinner, Michael thought. Been there, done that.

Closer to the fire, which was coming from his side of the plane, Brent noted the smoke had a weirdly chemical smell, like melted plastic.

Sure enough, the flight attendants soon rushed down the aisle hauling fire extinguishers and oxygen masks. Their expressions were determined, but worried. This was no minor mishap.

Suddenly, the captain spoke curtly over the PA system, “Ladies and gentleman, we’re diverting to Boston for an emergency landing. We’ll be on the ground in thirty minutes. Please do not get out of your seats.”

How much danger we were in? At this point, most passengers didn’t know anything, just that this was obviously a very serious situation. Smoke in the cabin? An emergency landing?

Brent thought: Are we going to crash? Am I going to die?

Michael’s flight attendant training kicked in. He told the anxious young man sitting next to him to put on his shoes in case we had to evacuate. Or run through wreckage, he thought. Then he looked across the cabin, mentally willing Brent to put on his shoes as well.

The minutes ticked by.

Now we were both thinking the same thing: Did we make a mistake setting out on this “digital nomad” thing?

If we’d never left home, sure, our lives might have been less exciting, but at least we’d still be alive. And how exactly might we die if the plane crashed? Would the impact kill us? Or would we die in the fire?

Most of the passengers remained remarkably calm. Brent turned to the man in the seat next to him, who he had only nodded to before, and they started telling each other their life stories. Michael calmly explained to his young seatmate how much training flight attendants received, and how qualified they were to handle situations exactly like this.

We were both trying to distract ourselves.

Michael is right that airplanes are the safest method of travel, but it’s also a method where whether you live or die is completely out of your control. In that taxi on the way to the airport, you could at least shout to the driver, “Hey! Watch out for the oncoming car!”

And unlike in a taxi, if your plane does crash, it’s a lot farther to the ground.

After thirty long minutes, we finally touched down in Boston. The tarmac was filled with a dozen fire trucks, red lights spinning ominously in the dark.

One woman had a panic attack and was immediately taken off the plane. Everyone else was told to stay put. The captain, intense but in control, came back to talk to the passengers personally, to make sure everyone else was okay. He admitted the situation really had been as serious as it seemed.

We later learned that a passenger’s external battery pack had overheated, setting an entire first-class seat on fire. When we finally deplaned, we saw that the seat had been reduced to its metal frame, charred and twisted.

The incident made national headlines.

Finally reunited on the ground, the two of us hugged, and Michael asked Brent, “Are you okay?”

“I am,” Brent said, “but for a while there, I was really worried we might die.”

Ironically, this wasn’t even our first encounter with fire on our travels. Last year in Bulgaria, our apartment caught on fire.

“What is it about us and fire?” Brent asked.

Later, Brent asked, “Seriously, did we make a mistake with this whole digital nomad thing?”

“Something bad could have happened even back in Seattle,” Michael said. Which is true.

But it’s also true that it is a dangerous business going outside your door, just like Bilbo says.

Ironically, we feel safer out of the United States than we do back home, because of the prevalence of guns in America and how much time you spend in a car. But we’re also in lots of unpredictable places and situations now, so bad things can happen. And sometimes do.

But life is also so much more interesting than before.

In The Lord of the Rings, when Bilbo warns Frodo, he’s talking about orcs and goblins, sure, but he’s also talking about how adventures force you to confront uncomfortable realities about the world around you, and also about yourself.

The reality we’ve discovered is that our life back in Seattle was pretty darn dull. Taking a few more risks was definitely worth everything we gained in exchange.

Even that fire on the plane made us more convinced than ever that setting foot outside our door was the right thing to do. Neither of us wants to die. But if it happens, we both know we’d have a lot fewer regrets now than before.

Because the other thing that Tolkien is saying in that quote from The Lord of the Rings is that a life spent cowering behind your door might be safe and easy — but it’s not really much of a life at all.

Brent Hartinger is the author of the gay teen classic Geography Club, which was adapted as a feature film, and Michael Jensen is an author, editor, travel blogger, and columnist. Visit them at BrentAndMichaelAreGoingPlaces.com, or on Instagram, Facebook, or Twitter.

Just in time for Trump’s impeachment, Lynda Carter may return as Wonder Woman