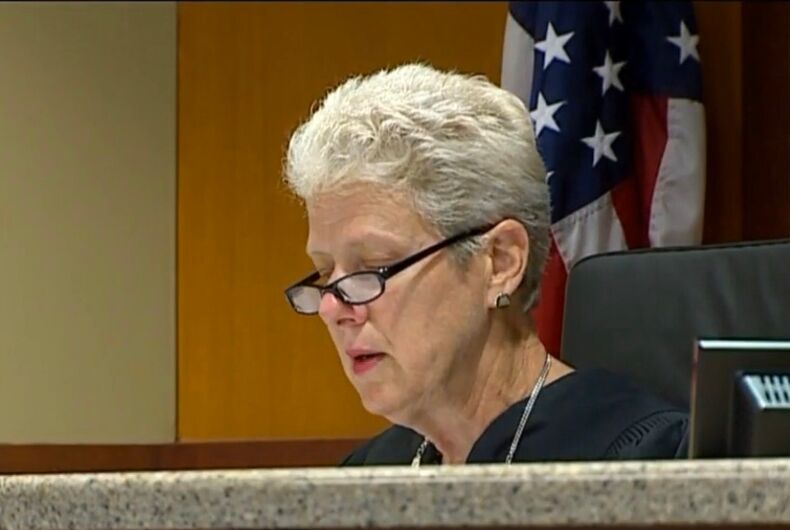 After national reports revealed that St. Stephen Parish Rev. Scott Nolan would not offer communion to a local judge because she is married to a woman, another Grand Rapids church has opened their doors to her.

Kent County Judge Sara Smolenski attended the First United Methodist Church, 10 minutes away from St. Stephen, for what they call a night of Inclusive Service, where they welcome LGBTQ+ people and their allies into their parish.

As we reported last week, Judge was called by Rev. Nolan and informed that he would no longer be able to offer her Holy Communion because of church doctrine – despite him doing so during his entire 3 year tenure at St. Stephen, where Smolenski has worshiped her entire 62-year life. Nolan made this decision mere months after taking a donation check from Smolenski.

…Smolenski’s been married to her wife Linda for 3 years now. Now, 33 year old head priest Scott Nolan claims that he’s required by the doctrine of the Catholic Church to deny her from receiving Communion “because you’re married to Linda in the state of Michigan,” he reportedly told the Judge.

“I try to be a good and faithful servant to our Lord Jesus Christ. My faith is a huge part of who I am,” Smolenski told NBC affiliate WOOD TV 8. “But it is the church that made that faith, the very church where he is taking a stance and saying, ‘Ho-ho, not you.’”

“Why now and why me?…How come all these other priests everywhere – good and decent, wonderful priests – they know me and they give me Communion?” Smolenski is quoted as saying in The Detroit News.

Despite the sudden roundabout by the priest, the Diocese of Grand Rapids supported him unequivocally and slammed the Judge for not living ‘an authentically Catholic Christian life’ and publicly revealing her ordeal. Several members of her congregation sided with her, saying that Nolan has turned their lifelong, welcoming church and the accompanying school into a homophobic, lifeless shell of itself.

Now, while Smolenski’s “not certain about her future at St. Stephen”, she found a friendly, loving congregation to worship during Thanksgiving weekend.

First United Methodist, under the leadership of both Rev. Dr. Joan VanDessel and Rev. Tim Tuthill, held their fourth Inclusive Service last week and invited Smolenski and her wife, Linda. They maintain that they welcome everyone to their church during regular Communion services, but “their message is more intentional” during Inclusive Services.

“I am so full of gratitude that these ministers, their congregation, has reached out to open this up and do what Jesus would do,” Smolenski told NBC‘s local affiliate WOOD TV 8.

Inclusive Services were started earlier this year when the General Conference of the United Methodist Church voted against accepting same-sex marriage and LGBTQ clergypeople, which has caused several pastors to protest and churches have shunned their Methodist roots.

“We try to be a hopeful voice that despite these other church’s decisions, our local congregation can tell a different story about God’s love,” Rev. VanDessel told WOOD TV 8. “I’m a part of the [LGBTQ] community, too, so for me it’s knowing that experience of being harmed or not having access to the church. I think we wanted to reach out and be a different voice.”

Smolenski hopes that this will show Rev. Nolan, the Grand Rapids diocese, and other Christians how the church should treat its parishoners.

“I speak my truth because God made me who I am and I’m not different. I’m just me,” Smolenski said. “It’s not about me and it’s not about the priest at my church. It’s really about saying Jesus wants everybody welcome at the table.”

Watch coverage of Smolenski’s time at United Methodist below.

Why are these supposed pro-LGBTQ big businesses partnering with a hate group?