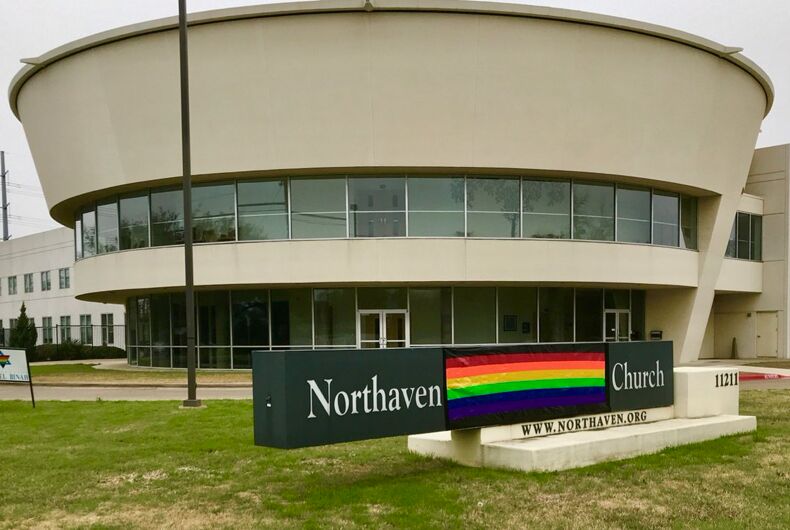 An LGBTQ-friendly church has covered up the words “United Methodist” on its sign in protest of a decision by the international church organizing body.

Last week General Conference of the United Methodist Church’s voted to reaffirm its anti-LGBTQ teaching that “the practice of homosexuality is incompatible with Christian teaching” and to punish individual churches that violate its ban on same-sex marriages and LGBTQ clergy.

The Northaven United Methodist Church in Dallas voted to allow weddings for same-sex couples at the church.

This past Sunday, congregants found the words “United Methodist” were covered up with a giant rainbow flag on the church sign in front of Northaven.

Related: This aspiring gay pastor’s impassioned plea for acceptance is rocking the internet

“A church that legislates exclusion and homophobia is a church that has left us,” the church tweeted with an image of the sign.

Before service, Reverend Marti Soper promised that nothing would change at the church. Soper wore a rainbow stole.

The diocese can punish Northaven for its LGBTQ-friendly stances, although Soper said that she believes that they will only face minor consequences because the Diocese of Dallas is fairly liberal.

A church that legislates exclusion and homophobia is a church that has left us. #foreveryoneborn #rmnetwork pic.twitter.com/wtrsoO75zB