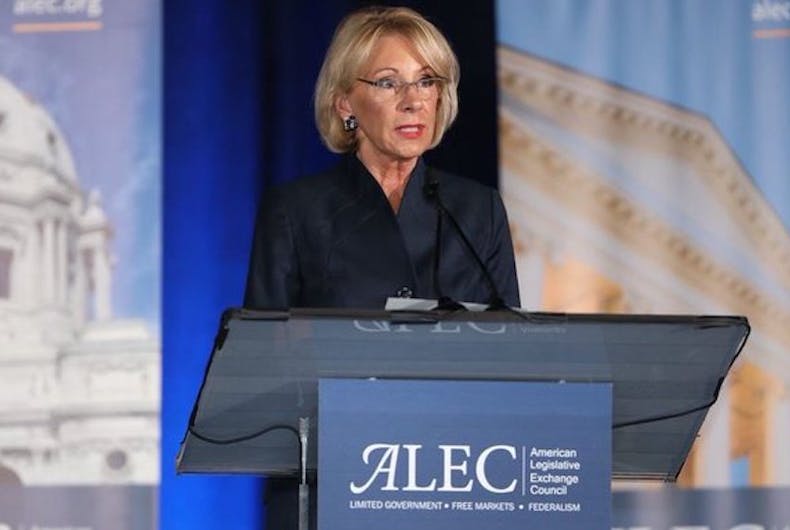 A consortium of big corporations decides to join forces with an anti-LGBTQ hate group. That sounds bad enough, but here’s the twist: many of those corporations also tout their commitment to LGBTQ equality.

The consortium in this case is the American Legislative Exchange Council (ALEC), a group that serves as a “bill mill,” cranking out pro-business and conservative measures for state lawmakers to pass. ALEC already has an anti-LGBTQ history itself, and now they will join the Alliance Defending Freedom (ADF), which keeps attacking LGBTQ rights through the courts.

The pair announced a partnership this week to focus on “free speech” issues. Just exactly what that means is unclear, but you can be sure it isn’t going to be about protecting free speech as most people understand it.

What makes the unholy alliance especially awful is that many of ALEC’s members purport to favor LGBTQ rights. For example, AT&T, Bayer, T-Mobile and United Parcel Service (UPS) are all members of ALEC — and all of them have a 100 percent rating from HRC’s Corporate Equality Index. There are several others putting on the same split personalities.

Several of these same companies even publicly supported the federal Equality Act, which would ban discrimination in the workplace and housing — not exactly the type of legislation that ALEC is out promoting.

The partnership was announced at the same time that a new report from the Center for Constitutional Rights was released. The report charges that ALEC allowed evangelicals and corporations to capture state legislatures to “safeguard white supremacy and corporate power.” The report detailed the deleterious effect of several ALEC-promoted bills, including Stand Your Ground and voter identification laws, on people of color.

ALEC has a long history of opposing LGBTQ rights, so its marriage to ADF is hardly a surprise. Founded by conservatives in the 1970s, ALEC pushed legislators in the following decade to pass bills preventing efforts to “homosexualize society.” Three legislators with deep ties to ALEC helped draft Indiana’s religious liberty law, which then-Gov. Mike Pence signed in 2015.

The group’s ties to the religious right have tightened over time. Last year, ALEC showed up at a major religious right conference last year. Some of their other corporate members reportedly include Bayer, Chevron, Expedia, FedEx, Sony, and Time Warner.

As for those companies that are members of ALEC and also promote LGBTQ causes: it’s a worthwhile reminder than when it comes to business, ultimately it’s money that talks.

Editor’s note: This story has been corrected to remove Farmers Insurance as a current ALEC member.

Update: Nearby congregation welcomes judge who was shunned by her lifelong church