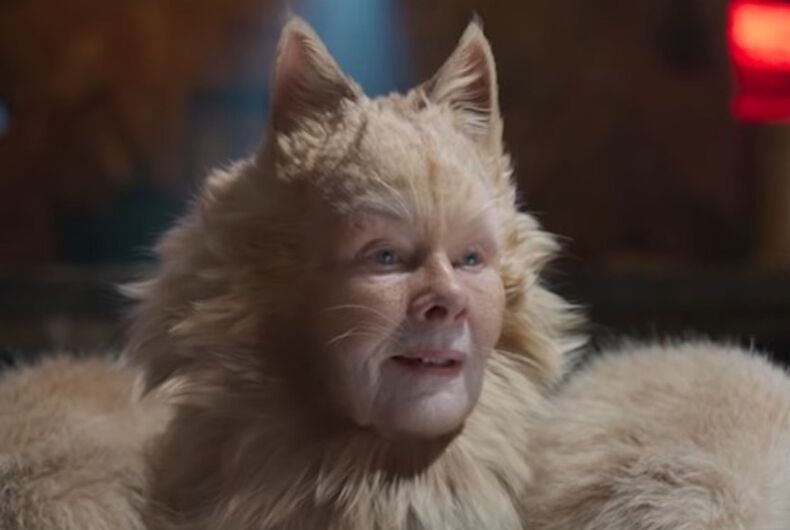 Judi Dench as Old Deuteronomy in the 2019 film adaptation of "Cats"Photo: Universal Pictures

In a recent interview, 85-year-old actress Judi Dench said (perhaps jokingly) that Old Deuteronomy, the feline character she plays in the 2019 film adaptation of the 1981 musical Cats, is transgender.

Although the actress plays a female cat referred to by female pronouns, there’s nothing else in the film, the musical’s lyrics, or her playing of the role that suggests that Old Deuteronomy is anything other than a cisgender anthropomorphic cat.

In the film, Old Deuteronomy is a very old cat who judges which of the singing and dancing cats in the “Jellicle Ball” will be reincarnated for another chance to live out their full potential. (Yes, we realize how ridiculous that sounds, but Cats is nothing if not whimsical).

After noting in the interview that the character has traditionally been played by men, Dench said, “I kind of call it ‘trans Deuteronomy,’ is the part for me, you know.”

It’s more likely that Dench was just making a small joke to an LGBTQ publication, but not everyone has appreciated her comment. The queer-friendly sci-fi site io9 wrote:

Comments like Dench’s are the perfect example of what Hollywood needs less of: hand-wavey, out-of-touch nonsense that makes it seem as if people have no idea what proper representation actually looks like. Retroactively trying to insert a bit of queer subtext into a story does little more than highlight the ways in which said story could have been better.

The site notes, “If Old Deuteronomy’s gender was at all explicitly addressed in Cats’ text, then the movie could have arguably been one of the most high-profile depictions of a trans-identified person in a big-budget Hollywood film out this year.”