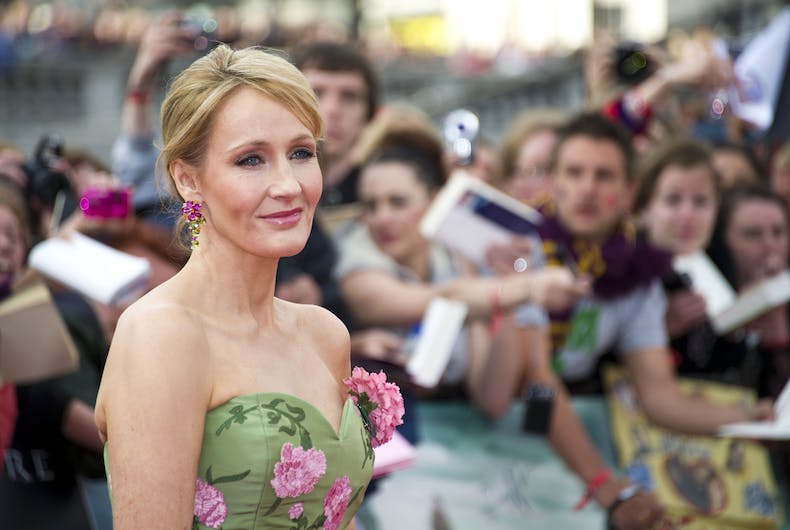 Harry Potter writer J.K. Rowling made a bold statement against transgender equality on Twitter, confirming to her millions of followers that she is sympathetic to transgender exclusionary radical feminists (TERFs).

On Twitter, the former billionaire wrote that people could “dress however you please. Call yourself whatever you like. Sleep with any consenting adult who’ll have you.”

She then wrote, “But force women out of their jobs for stating that sex is real?” with the hashtag #IStandWithMaya, referring to British TERF Maya Forstater.

Forstater is a tax expert at the Centre for Global Development, and her employer decided not to renew her contract after they found “offensive and exclusionary” language about transgender people in her tweets, including saying that “men cannot change into women” and that discrimination against transgender women can “hurt mens feelings.”

She filed a complaint against her employer, saying that her transphobia is a protected characteristic under the U.K.’s Equality Act.

A judge yesterday ruled that being transphobic is not a protected class and that her anti-transgender viewpoint “creates an intimidating, hostile, degrading, humiliating or offensive environment” that is “not worthy of respect in a democratic society,” so her employer had a right to let her go.

TERFs in the U.K. have been arguing that they are the real victims of a system that sometimes punishes transphobia and have been using the hashtag #IStandWithMaya to express their point of view.

J.K. Rowling’s views on transgender people have been the subject of speculation for years. This past January, Twitter users found her liking comments from TERFs who, for example, called transgender women “men in dresses.”

Rowling’s publicist said that the author “had a clumsy and middle-aged moment” and was holding her phone incorrectly and accidentally liked those comments.

But, for fans, this tweet settled the debate and put Rowling firmly on the side of TERFs. Many of her fans on Twitter were disappointed.

My daughter, who is trans, is a big fan of yours. It breaks my heart to see you post something indicating that discrimination against her is perfectly fine behaviour for an employee.

I grew up as a trans child reading your books as an escape. I would often pick out names from characters to give to myself, before I ever felt comfortable in who I was. This decision, to support people that hate me, and want to do me harm. It brings me to tears… Why. Why?

The saddest thing is that the woman who inspired millions of kids to be good to each other, include each other despite our differences and stand up against those who would oppress us – is now a bigot herself.

Harry potter and the transphobe's stone

But Forstater herself was happy to have Rowling on her side.

OMG! We are all crying. This is all i wanted for Christmas https://t.co/5ucPGUHIxY