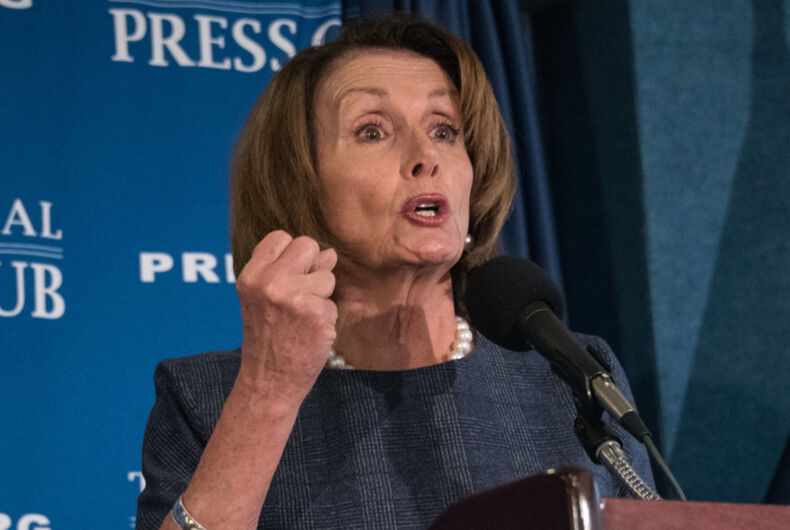 President Donald J. Trump was impeached by the House of Representatives last night, but the person everyone is talking about today is Speaker Nancy Pelosi (D-CA).

The most powerful Democrat in the nation guided the tumultuous all-day proceedings masterfully, including one moment that has been described as a “classic power mom move.”

Related: Trump released a photo of Nancy Pelosi giving him hell & it has backfired spectacularly

Shortly after the House passed the first article of impeachment and Pelosi officially read the results, a handful of Democrats started to cheer. Within seconds, the Speaker shot her side of the aisle a warning look and with a sharp gesture of her hand, silenced the group.

Pelosi had drummed into party members that the day was meant to be a solemn affair not worthy of celebration.

The internet, however, loved the moment – and Pelosi herself. The first woman to hold the post of Speaker, Pelosi has been seen as the antidote for a president known for bragging about sexually assaulting women. That she presided over Trump’s impeachment could be seen as karmic retribution.

Trump became only the third president in American history to be impeached by Congress, joining former presidents Andrew Johnson and Bill Clinton. A president has never been convicted in the Senate and removed from office.

Pelosi is a formidable leader! I applaud her! @SpeakerPelosi @TeamPelosi https://t.co/BJAOEMzbRH

Me to Nancy Pelosi pic.twitter.com/zK8AavumKW

I’ve given this look and made this gesture, and I know many of you reading this have too.

You can’t use it very often because it would lose its power, but, when you use it, it works.pic.twitter.com/gwB14Mm6cp

I saw the look that Nancy Pelosi gave to the Dems and without context, I quickly shut my mouth, cleaned my room, and am now washing the car. And I don't own a car.#IMPEACHMENTVOTE #Impeached #Impeached45 #ImpeachedPresident pic.twitter.com/2hnCNbbU2h

THIS IS THE FACE OF LEADERSHIP.
THIS IS INTEGRITY.
PUT WOMEN IN POWER.
THANK YOU, @SpeakerPelosi. pic.twitter.com/G5QIgy2EWh