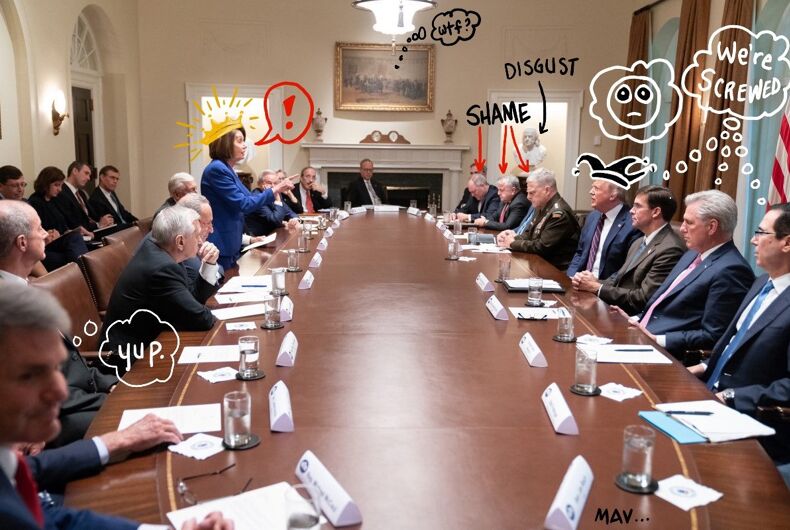 The internet has exploded with memes and jokes about Trump's humiliation.Photo: Facebook/Wilson Allen

I don’t see a #PelosiMeltdown, but I do see Nancy Pelosi putting a bunch of punkasses in their place: pic.twitter.com/7uBBq6sBjs

“He was insulting, particularly to the speaker,” Senate Minority Leader Chuck Schumer (D-NY) said at a press conference after they walked out. “She kept her cool completely. But he called her a third-rate politician. He said that there are communists involved and you guys might like that.”

“I mean, this was not a dialogue. It was sort of a diatribe — a nasty diatribe not focused on the facts, particularly the fact of how to curtail ISIS, a terrorist organization that aims to hurt the United States in our homeland.”

An unhinged letter Trump sent to Turkish President Recep Tayyip Erdogan was leaked before the meeting. While the rest of the country were embarrassed by the highly unusual and juvenile tone of the note, Turkish citizens are incensed.

The letter begged Erdogan to “make a deal” and insisted the Turkish president consider how history will judge him.

“It will look upon you forever as the devil if good things don’t happen,” Trump wrote in the letter. “Don’t be a tough guy. Don’t be a fool!”

“Now, Erdogan has no option but to delay ceasefire in Syria, less he be humiliated in front of his nation as weak and bowing to America’s threat,” Soner Cagaptay, a prominent Turkey expert, tweeted.

But when Trump released a photo of Pelosi giving him hell at the White House, calling her “Nervous Nancy” and implying the Democrats were cowardly for leaving, the tactic backfired spectacularly. While the internet went wild with memes and jokes, Pelosi’s clapback may be the best of all.

She made the picture her cover photo on social media accounts.

NEW: White House Press Secretary tells me: "The President was measured, factual and decisive, while Speaker Pelosi’s decision to walk out was baffling, but not surprising…While democratic leadership chose to storm out … everyone else in the meeting chose to stay in the room." pic.twitter.com/eoxZaZ6Nzz

PELOSI on Trump: "I think now we have to pray for his health. Because this was a very serious meltdown on the part of the president." pic.twitter.com/ckhNSeDmrG

All I see is a woman doing her job to the best of her ability…unlike half the men sitting in that room. #PelosiMeltdown pic.twitter.com/KPVSMfo1F6

I’m not sure either hashtag is appropriate for this magnificent mashup but I’ll give it a whirl. You earn my respect whenever you’re on your feet as the only woman in the room…especially this room. #PelosiOwnsTrump #PelosiMeltdown pic.twitter.com/qOI4pOf9iM

I don’t see a #PelosiMeltdown, but I do see Nancy Pelosi putting a bunch of punkasses in their place: pic.twitter.com/7uBBq6sBjs

This is the level of petty i aspire to 🤣#Pelosi #PelosiMeltdown https://t.co/H2s6ZeuZcj

A gay man was attacked by 4 teens with hammers in public. But will they be caught?