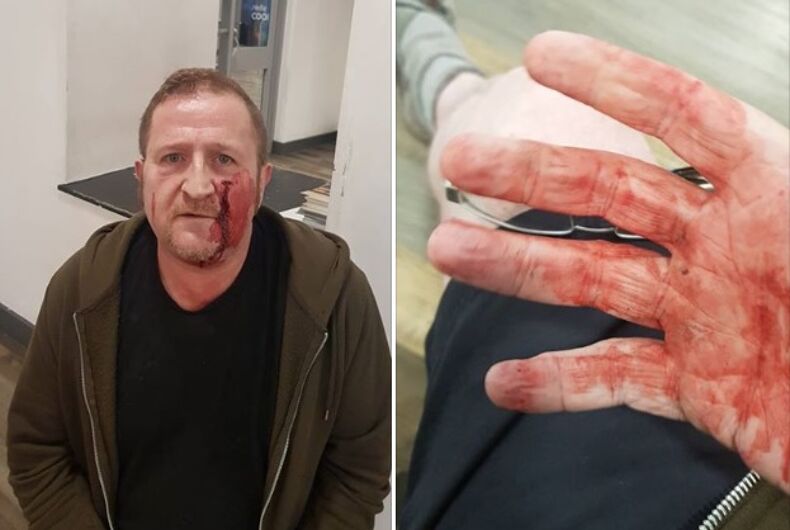 A gay man says he was brutally attacked with a hammer earlier this week by teenage boys “who tried to kill me.”

Marc Power, who lives in Dublin, said that he went to meet up with a man he connected with through Grindr at around 10:30 p.m. this past Tuesday. But it turns out it was a fake profile.

He went to the public place that they were supposed to meet but he found four teenage males who allegedly hit him on the head with hammers.

He also said that they attacked and “destroyed” his car.

Power was taken to the hospital for treatment for facial injuries.

Police said that they are investigating the attack as a hate crime, which Power called a “premeditated homophobic attack.”

Power said that he’s taking his story public so that the attackers can be caught.

“The police were helpful but hands tied as dumb teenage scum fear nothing,” he wrote on Facebook. “I’m going to media about this hopefully these scum will be rounded up.”

I've just been the victim of a premeditated homophobic attack here in Dublin. Went to meet someone off grindr. Was…

County Kildare Councillor Chris Pender, who is gay, tweeted about the attack on Power. He said that he too was attacked by someone using a fake Grindr profile, and that police told him that he shouldn’t “flaunt” his sexuality.

Folks last night this man was attacked because he's gay because a group of homophobic scum bags set up a fake profile on @Grindr and used it to lure him into an ambush. As a gay man this terrifies and infuriates me all in one. We all use or have used Grindr for various 1/ pic.twitter.com/ur8XOo9eh7

Even now some of that bull sticks with me from time to time. 5/