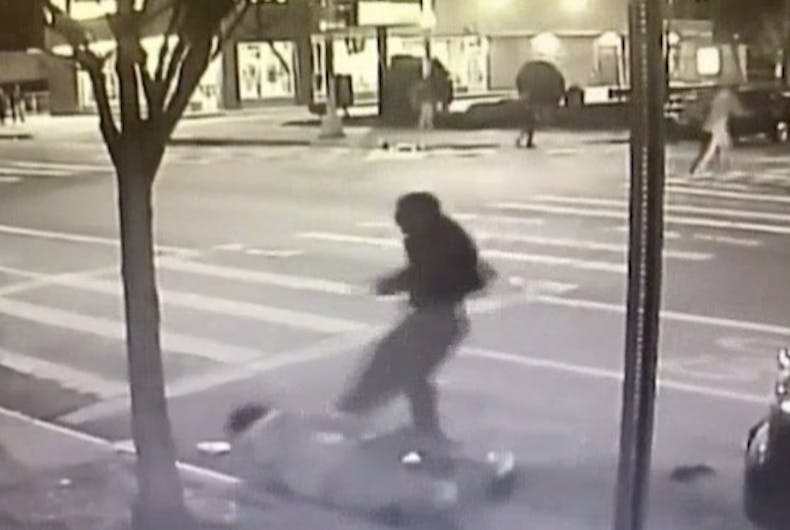 A 60-year-old gay Latinx man named Juan Fresnada was beaten to death in the Bronx, New York by a gang of men who are still being sought by police. While video footage captured the attack and the faces of the attackers, it also showed that no passing drivers or pedestrians stopped to help as Fresnada as he lay dying in the busy public street.

The attack happened near 1:30 a.m. as Fresnada exited a McDonald’s fast-food restaurant with his 29-year-old partner Byron Caceres. Caceres said that a man walked up to Fresnada, repeatedly demanded money from him, and then followed them into the street before several other men began attacking the couple.

Related: This guy screamed the n-word & “fa**ot” at a youth group in McDonalds. Now he’s in jail.

A friend of Fresnada told the press, “The guys just told them ‘Give me the money, give me the money.’ He was like ‘I don’t know what you’re talking about.’”

“My husband tried to defend me,” Caceres added. “The guy had his fist ready like he was ready to attack me. My husband said, ‘Don’t you get close to him.’”

As the group began to punch and kick Fresnada to the ground, he told his boyfriend to escape.

“They were beating him for 10 or 15 minutes,” Caceres told the New York Daily News, adding that he didn’t have a cell phone to call the cops. As he fled, Fresnada’s attackers smashed a metallic trash can onto his head, leaving him with a fractured skull and bleeding in the brain.

“I went back and found him on the floor,” Caceres said. “He was breathing heavily and bleeding from his head. I tried to give him CPR but then a guy said I should stop because of how heavily he was breathing.”

Although no passing drivers or pedestrians tried to help as he lay dying in the street, an ambulance later arrived to take Fresnada to the hospital where he died from his injuries several days later. Caceres says the attackers took the single dollar Fresnada had on him.

Police have asked anyone with information about the attackers to Crime Stoppers at 1-800-577-TIPS. Below is video footage of the attackers.

The ten most heartwarming queer news stories of 2019