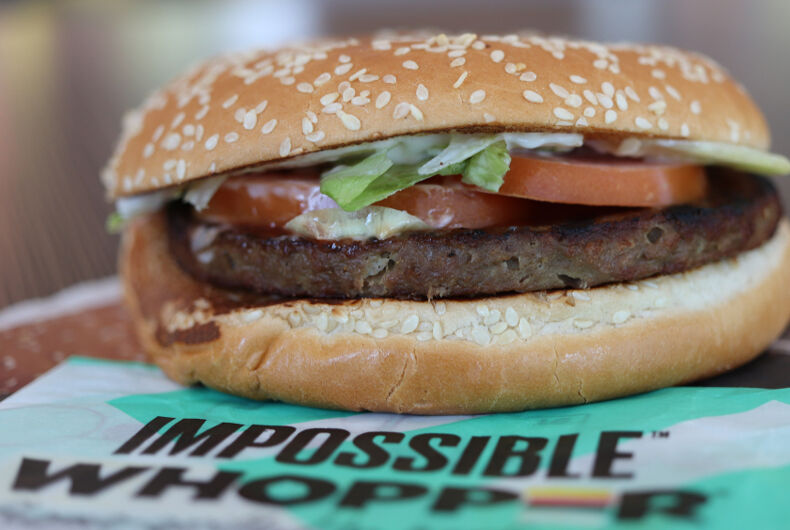 The rumor started because of an article written by James Stangle, a South Dakota veterinarian, and printed in Tri-State Livestock News, a publication that generally opposes plant-based meat substitutes as harmful to livestock farmers’ businesses. Stangle wrote, “An Impossible Whopper has 18 million times as much estrogen as a regular Whopper.”

The Impossible Burger is made partly of soy, a protein-rich product of soybeans which contains high concentrations of isoflavones. Isoflavones “belong to a class of compounds generally known as phytoestrogens… [which are] similar in function to human estrogen but with much weaker effects,” according to The Washington Post.

But that hasn’t stopped right-wing publications and commenters from repeating Stangle’s lie. Conservative news outlets like the National File and MichaelSavage.com have republished articles repeating it as fact, and far-right Twitter users are amplifying the lie with some occasional transphobic comments.

Here are two such tweets:

Dudes..Do you want to grow Breasts?
East the #Impossibleburger. It has enough Estrogen to make you grow those Trans lookin' tits you always wanted!
UH OH!
Boy it sucks that you can't short private companies isn't it?
FLUSHHHHH you can hear the value toilet flushing!#FrogsGay pic.twitter.com/ed7sQMLkw1

Sure, let's turn our boys into girls fast!!! What a great agenda!

Social engineering is not enough apparently these days, so let's do it with the food that we eat!https://t.co/86hx0BwUbp

This isn’t the first time that soy has been a bogeyman for “feminizing” men. In 2006, James Rutz, founder of Megashift Ministries and religion columnist for worldnetdaily.com, wrote that soy “commonly leads to a decrease in the size of the penis, sexual confusion, and homosexuality.” However,  no studies have ever actually linked the ingestion of phytoestrogens to becoming gay.

He was told he could only adopt a disabled child. Now the internet has fallen in love with them.