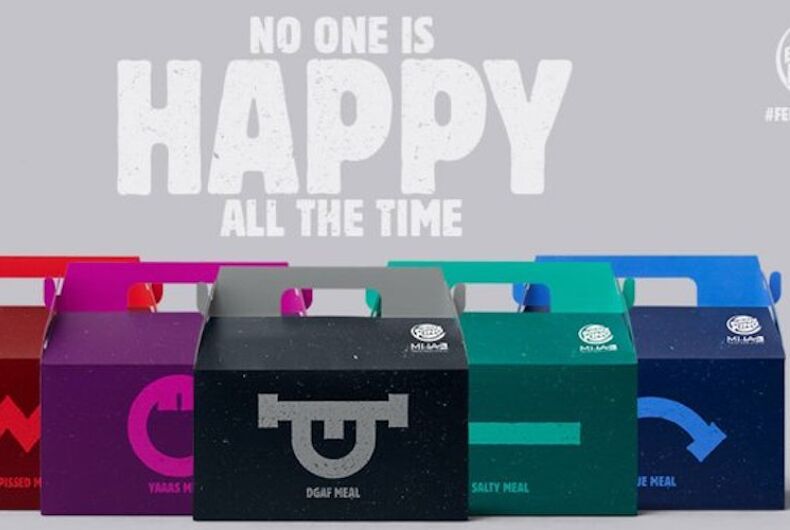 In commemoration of Mental Health Awareness Month, Burger King recently unveiled its #FeelYourWay campaign, offering moody alternatives to McDonald’s compulsively cheery “Happy Meals.” And guess who has a problem with it: the antigay hate group One Million Moms, a group that only has 93,000 social media followers.

Over the next month, Burger King restaurants in Austin, Seattle, Miami, Los Angeles and New York City, will offer five “Real Meals,” including a Blue Meal, a Yaaas Meal, a P*ssed Meal, a Salty Meal, and a DGAF Meal. Vox.com explains the promotional video (below) that accompanied Burger King’s new campaign:

“Not everybody wakes up happy,” a man sitting on his bed [says.] “All I ask is that you let me feel my way.”

His spoken word poem (yes, really) is picked up and iterated upon by a teenage girl who finds the word “skank” carved into her locker, and then an adult woman whose boss did something creepy, a young man who has so many student loans he will live with his parents forever, another young man who has just been ghosted and worries about dying alone, and a young mother in overalls who marches down the street announcing the rhyme, “They say I’m too young to raise my baby girl / Take your opinion and suck it world.”

The ad ends with the tagline: “No one is happy all the time. And that’s OK.”

One can argue whether it’s ethical for Burger King to use depression to sell food whose nutritional makeup can make you feel worse. But One Million Moms is appalled because children might confuse the Real Meals for Happy Meals and be exposed to the words “p*ssed” and “DGAF” (which is short for “don’t give a f*ck”).

Related: One Million Moms will meet with Walmart execs about a gay dating ad, but they lied to get the meeting

In a press release, the antigay group wrote:

Though the Real Meals are Whopper-based meals, the boxes are replicas of Happy Meal boxes and will, therefore, attract children.

No matter the target market, this campaign is a marketing disaster. Burger King’s #FEELYOURWAY campaign is irresponsible and offensive to customers. One Million Moms is particularly offended by the boxed meals Pissed and DGAF.

Burger King needs to know parents do not approve! TAKE ACTION: If you agree that this marketing campaign is inappropriate, please sign our petition urging Burger King to remove the boxed meals “P*ssed” and “DGAF” from their menu immediately.

One Million Moms has a habit of picking on high-profile TV shows, movies, magazines and commercials. Their past moral outrage has been directed at Parents magazine for featuring a same-sex couple, an anti-smoking ad that mentioned erectile dysfunction, Highlights magazine for acknowledging the existence of gay people, Scholastic books for featuring LGBTQ-inclusive children’s books, the Roseanne reboot for featuring a non-binary child, a Disney cartoon series for its brief scene of two men kissing, a Zales jewelry commercial for featuring a lesbian couple and the fairy tale drama series Once Upon a Time for showing a lesbian kiss.

In December 2015, when One Million Moms protested against American Girl magazine for featuring two gay dads, their protest backfired, getting the dads lots of positive press coverage and getting their non-profit organization for foster children a 300% increase in donations.

Are there any Democrats left who are NOT running for president?