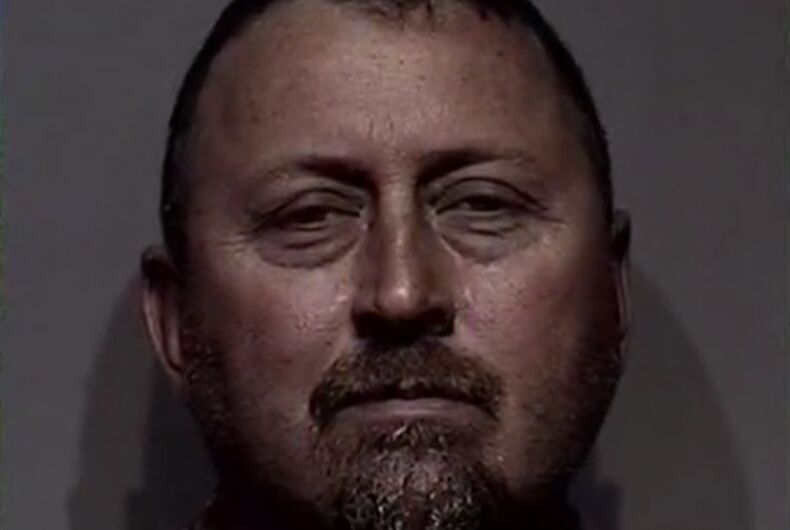 A man who was caught on video shouting slurs at a group of high school students in Idaho has been arrested and charged with a hate crime.

On July 12, a group of high schoolers from Spokane, Washington, was in Coeur d’Alene, Idaho. After seeing a preacher, the youth group leader Jose Ceniceros took them to McDonald’s for ice cream.

Richard Sovenski, 52, was also at the McDonald’s. In a video that has been viewed almost 100,000 times on Vimeo, Sovenski can be seen yelling slurs at the racially diverse group of teenagers.

“Why don’t you get a fuckin’ job,” Sovenski shouted in the video. “I will fuck you up in a fuckin’ heartbeat, you fuckin’ little faggot. Oh you fuck you, you fuckin’ half-breed.”

Ceniceros said that the man also used the n-word.

Sovenski’s son Bryce be seen in the video trying to get his father back into the restaurant. But before they enter, Bryce grabbed his crotch.

Ceniceros said the confrontation started inside the McDonald’s, when Sovenski started yelling at the group. He tried to get the teens out of the restaurant, and Sovenski punched him and threw him to the ground.

He started recording outside the McDonald’s.

“The kids couldn’t really believe it,” Ceniceros said. “Five minutes earlier we were in church.”

After the group left, Sovenski left the restaurant before police showed up. He eventually went to the police station for questioning.

Sovenski’s wife Colleen told police that the teens were at fault because they were “being rude, dancing and running around causing a disturbance.”

Sovenski told law enforcement officers that he was worried for Colleen, who had just had surgery. He initially said that he only yelled at the group, but later admitted to pushing Ceniceros because “he thought he was going to get hit.”

He also told police that he was using racial slurs because he was “trying to get the upper hand” in the argument.

Sovenski has been arrested. He is charged with felony malicious harassment – a hate crime – and misdemeanor battery.