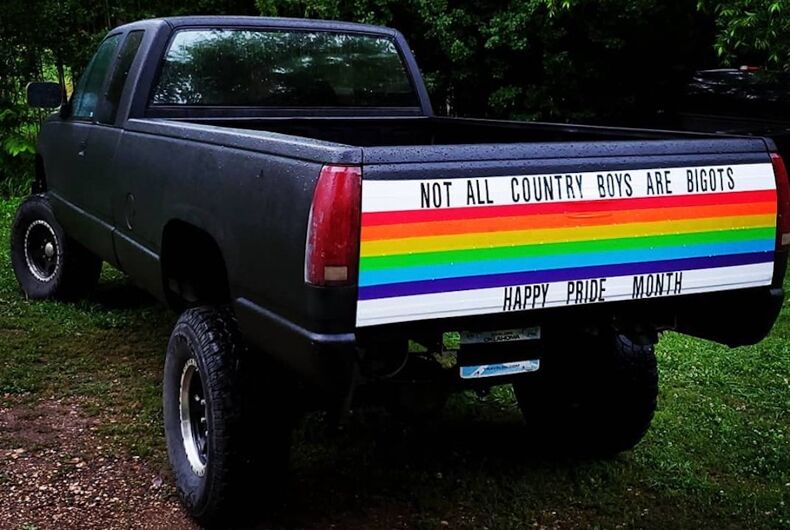 All too frequently in 2019, as part of our news-gathering, LGBTQ Nation had to report on bad news. But for all of the horrible things that happened, glimpses of sunshine peeked through.

Some of our most popular stories of 2019 were heartwarming pieces – and only one of them is about an actual member of the community. The rest of the articles are about allies doing what they do best – standing in solidarity with LGBTQ people.

Related: This lesbian fled Russia in a boat & sailed across the ocean to be with her love

Here are the top ten posts published on LGBTQ Nation last year that will make you want to cheer and cry at the same time.

Hulbert, Oklahoma is a small town with a population of 590 located in the northeastern county of Cherokee, a region where over 60 percent of voters chose Donald Trump. In short, it’s not the sort of place you’d expect to welcome LGBTQ people.

Cody Barlow would like to prove you wrong. And he did.

Colin O’Leary took to the passenger seat of his mother’s car to lip-synch along with more than two dozen Broadway hits, from Hamilton to Rocky Horror, and a total of eight clips from Phantom of the Opera alone. This incredibly funny video was the most popular article of the year. Technically, it published in late December of 2018, but it definitely deserves to make the list.

She attends gay weddings as a “stand-in mom.” Now they’re making a movie about her.

Sara Cunningham gained national attention in 2018 when she posted on Facebook that she would attend weddings as a stand-in mom since so many LGBTQ people have been rejected by their parents. But when Jamie Lee Curtis purchased the rights to her life story, the internet exploded in anticipation and applause.

After the city of Boston issued a permit for a “straight pride” parade, the web went wild with condemnation and comedy. Twitter user Eva Victor won the internet.

Washington Nationals pitcher Sean Doolittle refused to visit the White House after his team won the World Series, in part because he wants to be an ally to LGBTQ people. His wife has two mothers.

“People say you should go because it’s about respecting the office of the president,” he said. “And I think over the course of his time in office he’s done a lot of things that maybe don’t respect the office.”

The teenage would-be members read an open letter in front of the congregation to explain why they couldn’t support discrimination despite the church’s recent controversial decision to crackdown on LGBTQ clergy and marriage equality.

The eight teenagers received a standing ovation from the congregation for their decision to stand up for Christian values in the face of systemic discrimination.

This April, Zion Wade, the 12-year-old son of NBA star Dwyane Wade, went to the Miami Beach Pride parade with their stepmother, Gabrielle Union, and siblings Zaire and Kaavia. Though the elder Wade couldn’t be there due to a basketball game against the Toronto Raptors, he cheered his family on via Instagram.

The photographs of Zion and family at Pride went viral. Most people celebrated the love and support Zion’s family gave them. Sadly, there was also homophobic backlash.

When a good-ole-boy picked our editor-in-chief up in a pickup at the New Orleans airport, he thought Lyft might have paired him with a Trump-loving redneck. The story of the trip went viral after it was posted on social media and, probably not coincidentally, the two men have become friends.

Who doesn’t love a good rebellion story? When the Trump administration forbade embassies from flying pride flags on government-owned flagpoles, the staff at several outposts worldwide got a little… creative. They didn’t break the rules, but they definitely bent them.

“This is a category one insurrection,” one diplomat told the media.

After the General Conference of the United Methodist Church voted to reaffirm their teaching that homosexuality is “incompatible” with Christianity and to punish individual churches that perform marriages for same-sex couples and allow LGBTQ clergy, American churches pushed back.

The churches used their signs, buildings, and lawns to apologize for the denomination’s decision to double down on anti-LGBTQ teachings worldwide and LGBTQ Nation brought readers some amazing photos from around the nation.

What is asexual? Here’s the asexual spectrum, an asexual quiz & everything else you’re curious about