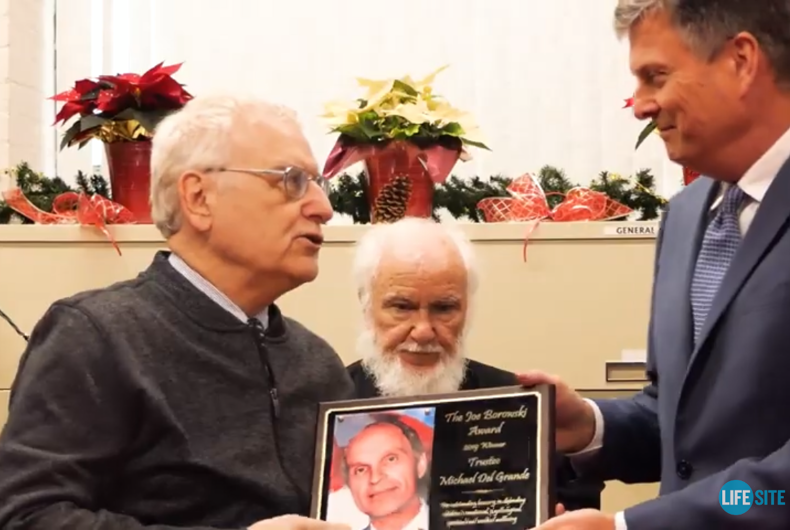 Michael Del Grande, a Toronto Catholic District School Board (TCDSB) Ward 7 representative with a long history of anti-LGBT action, was awarded by the Campaign Life Coalition for “unwavering commitment to defending authentic Catholic teaching”, which includes voting against measurements that recognize gender identities and LGBT initiatives.

The award comes a month after Del Grande compared being gay to pedophilia, bestiality, cannibalism and vampirism at the end of a board meeting on November 7, which earned him the ire of many. At the meeting, he was arguing against allowing different protections for LGBTQ people to be implemented in the district and board’s code of conduct.

Del Grande was one of four who voted against (and was ultimately outvoted by) allowing protections for LGBTQ students in Toronto Catholic schools. After his comments became known, he claimed he was speaking in “hyperbole” and “not serious.”

Now, he receives the Joseph P. Borowski Award, given to “a politician who has demonstrated outstanding commitment to the cause of protecting human life and the family.” The award also recognizes the recipient “for outstanding bravery in defending children’s emotional, psychological, spiritual, and medical wellbeing.” It is awarded by the Campaign Life Coalition, which according to Patheos, is a hate group.

This has bought ultra-conservative media attention to Del Grande. LifeSiteNews describes the board member as “defending kids from [the] LGBT agenda” and “singled out”. The outlet invited Del Grande to write an op-ed, which has prompted the board to call another meeting this Monday asking for him to retract his comments.

“I find the comments made by the trustee to be quite unacceptable and quite disturbing, actually…[gender identity protections] are not an item that is for discussion,” Leece said to PinkNews. “The government finds those comments unacceptable in this province, for any child who already feels victimised or stigmatised in the classroom.”

His detractors are pointing to an accusation of harassment by a student within Del Grande’s ward in The Toronto Star. According to the report, “[Del Grande] ‘harangued and harassed’ a 16-year-old female student over her views on abortion, eventually bringing her to tears.” Del Grande was upset with the student for expressing support for screening of a film that references abortion. He allegedly approached her in an “extremely unfriendly and accusatory tone” and didn’t let her leave the room. The school had to implement a safety plan to prevent further incidents.

At the award ceremony, three Catholic priests praised and prayed for Del Grande while a room of his supporters applauded him through a speech. He told the room, “I’m not going to lay down….And I want to thank you. I don’t think you need to thank me. I’m just doing what I’ve always been taught in my faith, [which] is to follow the cross.”

After the backlash, Del Grande went and prayed for ‘support’ and guidance from his God. “I need support. I need friends here because I’m alone. I feel very alone[.] … And I said, you know I’d appreciate any … help that you can help me with,” he recounted.

“It is critical that this board address the comments made by Trustee Del Grande that I and many other trustees consider to be extreme and disrespectful to our Catholic school community,” Markus de Domenico said in an email. “These comments in no way represent the vast majority of the TCDSB community and need to be challenged publicly.”

Think Fox News is bad? Wait until you see One America News Network.