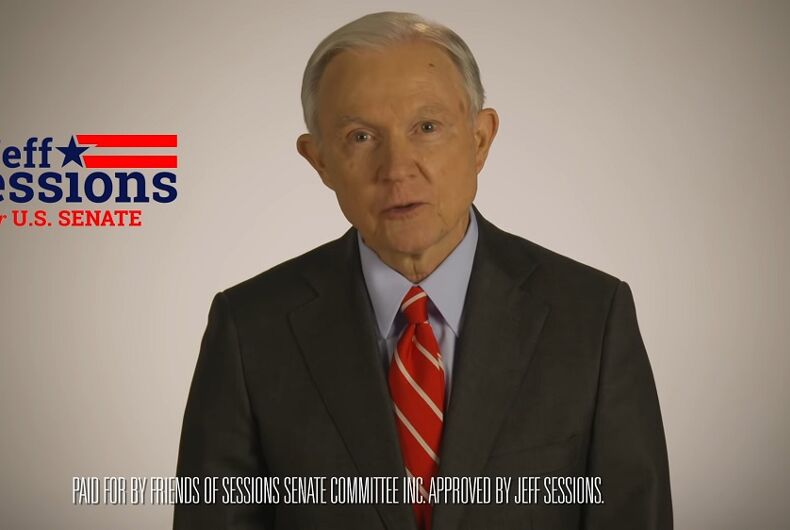 If it weren't for the logo, it wouldn't be obvious that this was a campaign ad for Jeff Sessions.Photo: Screenshot/YouTube

Sessions – who has a long history of anti-LGBTQ actions spanning his career in politics – was in the Senate for two decades until Donald Trump nominated him Attorney General in 2017. Two years later, Trump pushed him to resign because he recused himself from the investigation into Russian meddling in the 2016 election, something that even Sessions knew would have been improper.

Sessions showed that nothing has changed since Trump effectively made him lose both his Senate seat and his job as Attorney General when he announced his candidacy for Senate last night with an ad.

“When I left President Trump’s cabinet, did I write a tell-all book? No,” Sessions said in the video spot, where he doesn’t even mention his candidacy other than showing his “Jeff Sessions for U.S. Senate” logo.

“Have I said a cross word about our president? Not one time,” he promises.

He explains that he has no ill feelings toward Trump, practically groveling: “I was there to serve his agenda, not mine. The president’s doing a great job for America, and Alabama, and he has my strong support.”

It’s almost hard to believe that this is an ad for Sessions’s Senate campaign, not Trump’s reelection campaign.

While Sessions is being very nice to Trump, Vox notes that the feeling is not mutual. Trump has tweeted criticism of Sessions over a dozen times.

Sessions will still have to win the Republican primary for the Senate race and then face off against incumbent Sen. Doug Jones (D). Jones won a special election in 2017 to fill the seat left open by Sessions, beating out anti-gay extremist and disgraced state supreme court chief justice Roy Moore. While Alabama is very conservative, Moore faced multiple accusations of sexual impropriety, some from women who were minors when they were propositioned or assaulted by Moore.

Sessions opposed LGBTQ equality for his entire political career. As a state attorney general in the 1990s, he fought against an LGBTQ college conference taking place in the state, saying that discussing homosexuality will cause “irreparable harm.”

Then, for two decades in the Senate, he opposed all LGBTQ advances, earning himself consistent “0” ratings on HRC’s Congressional Scorecard. He even voted against hate crimes legislation, saying that LGBTQ people don’t “face that kind of discrimination.”

As U.S. Attorney General, he helped dismantle protections for transgender students and made “religious freedom” the central project of the Department of Justice. He spoke at a hate group summit and set up a “religious liberty task force” in part to fight for his expansive view of religious exemptions to anti-discrimination laws.

Sessions appears worried that his troubled history with Trump might be a problem in the Senate race in Alabama, but his and Trump’s policy goals are similar.

TV was 10.2% queer this year. But that’s largely because of four influential producers.