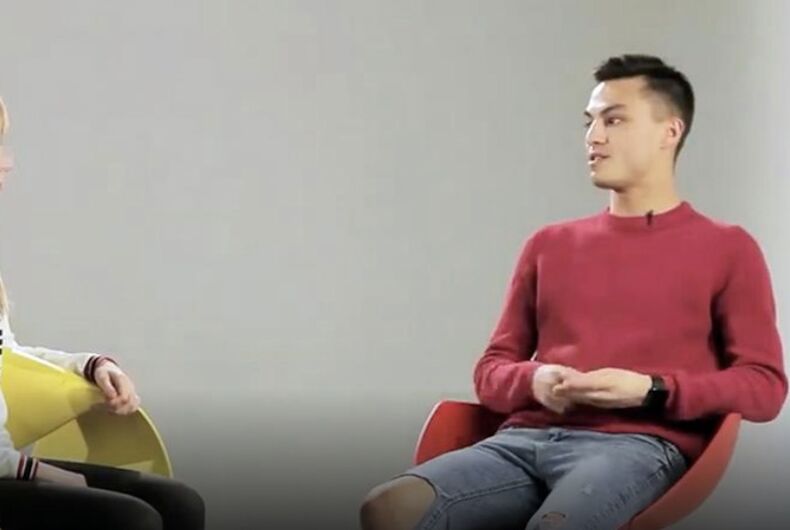 Maxim Pankratov discusses being gay with kids in a video of the now-deleted Real Talk YouTube channel.Photo: YouTube screencapture.

Maxim Pankratov, a 21-year-old Russian man who appeared in a now-deleted YouTube video of kids asking him questions about his experiences as a gay man, is receiving death threats for participating.

The producers of the video are also reportedly facing up to 20 years in prison on felony charges of “sexual violence against minors” for creating the video. The kids’ parents are being harassed by national child welfare investigators and could have their kids taken from them.

The video — which was part of the Russian Real Talk series showing kids talking to adults — showed “four children aged 6 to 13” asking Pankratov how he realized he was gay, how others treat him, how he dresses, his feelings towards women, and if he’d like to marry or have kids.  PinkNews reports that all of the questions were age-appropriate and didn’t discuss sex.

Russian Duma Deputy Speaker Petr Tolstoy contacted Russia’s the Ministry of Internal Affairs and the country’s Federal Service for Supervision of Communications, Information Technology, and Mass Media (Roskomnadzor) to examine whether the video violates the country’s 2013 law forbidding the “advocacy of non-traditional sexual relations among minors.”

Now that news reports of the video have spread throughout Russia, Pankratov says he has received death threats and hateful messages from online strangers. He also says two men near his home chased and threatened physical violence against him.

Meanwhile, representatives of the human rights organization Open Russia say that federal child services are “terrorizing” the parents whose kids participated in the video and threatening to take their kids away. The creators of the Real Talk series have since deleted their entire YouTube channel and could face prison time if Tolstoy decides to prosecute.

Kyle Knight, senior LGBTQ rights researcher at Human Rights Watch, said, “The perniciousness of the ‘gay propaganda’ law apparently knows no boundaries. A criminal charge of sexual assault of children for a YouTube video that contained no sexual content is as outrageous as it is terrifying.”