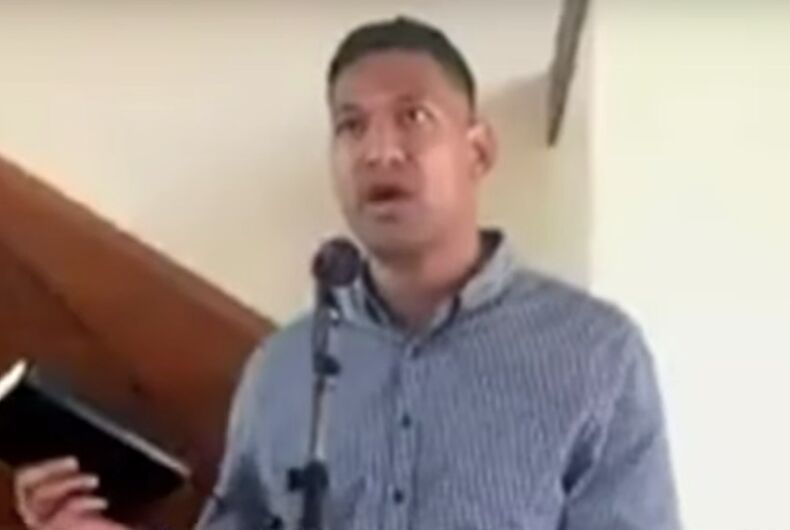 Folau, who was terminated from his position on the New South Wales Waratahs rugby team this last April after telling his over 330,000 Instagram followers that “hell awaits … homosexuals,” made his bushfire comments in a sermon he delivered this weekend.

Related: Australian weddings will no longer start with an anti-LGBT statement

“Same-sex marriage,” he said, “in the eyes of God it’s evil. In society today, it’s good…. Look how rapid these bushfires, these droughts, all these things have come in a short period time. Do you think it’s a coincidence or not.”

In Australia, this past couple of weeks, with all the natural disasters, the bushfires and the droughts. God’s word says for a man and a woman to be together, one man and one woman in the covenant of marriage to be together. Abortion, it’s OK now to murder, kill infants, unborn children…. God is speaking to you guys. Australia you need to repent and take these laws and turn it back to what is right by God.

So far, the Australian bushfires have already killed four people and destroyed 259 homes and 2.4 million acres of land.

Gay member of parliament Alex Greenwich blasted Folau for his comments and cited his ignorance in opposition to so-called “religious freedom” legislation currently being considered by Australian Prime Minister Scott Morrison. The legislation would allow religious-based discrimination against LGBTQ people and others:

Folau using the tragedy of the bushfires to get attention and cause further harm, should be all the Morrison government needs to drop their unnecessary and unworkable “religious freedoms” laws. These are dangerous and deranged words designed to harm. Hopefully, they act as a wake-up call to the Morrison government to drop plans to provide extra special privileges and protections to characters like Folau.

In response to Folau’s comments, Alan Jones, former coach of Australia’s national rugby team, said, “Now Israel is a lovely human being — I know him well. Israel, button up. Button up. These comments don’t help.”

Folau is suing Rugby Australia for firing him over his homophobic comments.

Here is a video of Folau’s comments and other people’s response to them: