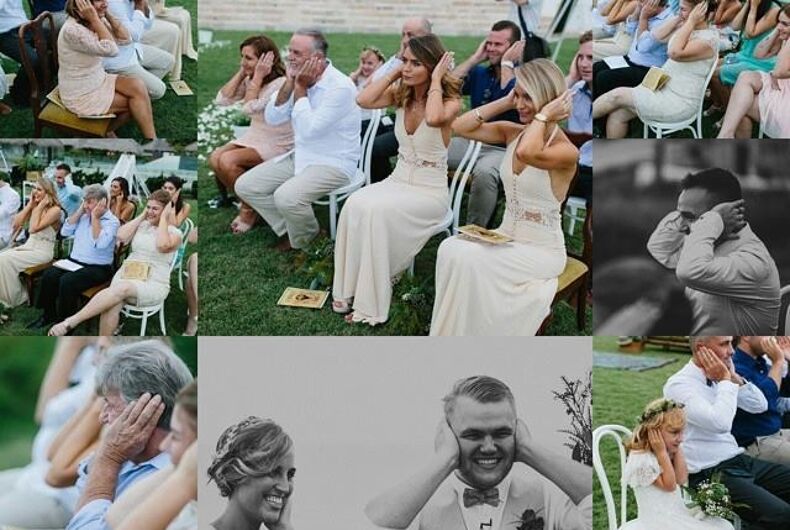 Since the Marriage Law of 1961, celebrants – what marriage officiants are called in Australia – have had to read a few sentences at every wedding they preside over called the “monitum,” or “warning” in Latin.

The little speech includes a sentence that, until yesterday, specified that same-sex couples could not get married: “Marriage, according to law in Australia, is the union of a man and a woman to the exclusion of all others, voluntarily entered into for life.”

This had to be read at every wedding in Australia. As one columnist put it in The Guardian in 2015, “It felt like I was insulting [our gay guests] as our vows were made.”

Some celebrants would specify that the woman and man getting married still supported marriage equality. Others would turn off the mic as they said that sentence. One researcher found that some celebrants just skipped it if they were confident that no one would report them.

Still others asked guests to cover their ears for the words:

One wedding photographer posted pictures of another theatrical protest on Facebook.

Marriage equality was legalized this week in Australia, and today is the first day that it’s legal. This means that same-sex couples can register to be married, although we’ll have to wait a month for the first same-sex weddings.

Couples who were married abroad are officially recognized as married today.

This also means that the monitum has changed. Starting today, celebrants will instead say, “Marriage, according to law in Australia, is the union of two people to the exclusion of all others, voluntarily entered into for life.”

Buzzfeed reports that the marriage notification form and the official marriage certificate have changed, too. The forms used to ask for the “Bridegroom” and the “Bride.” Now they say “Party 1” and “Party 2,” with three choices to check off next to them: “Groom,” “Bride,” and “Partner.”

So it was true that straight weddings were affected by marriage equality. Why anyone would want a legal statement read at their wedding that says that the state doesn’t treat people equally, though, is beyond my comprehension.