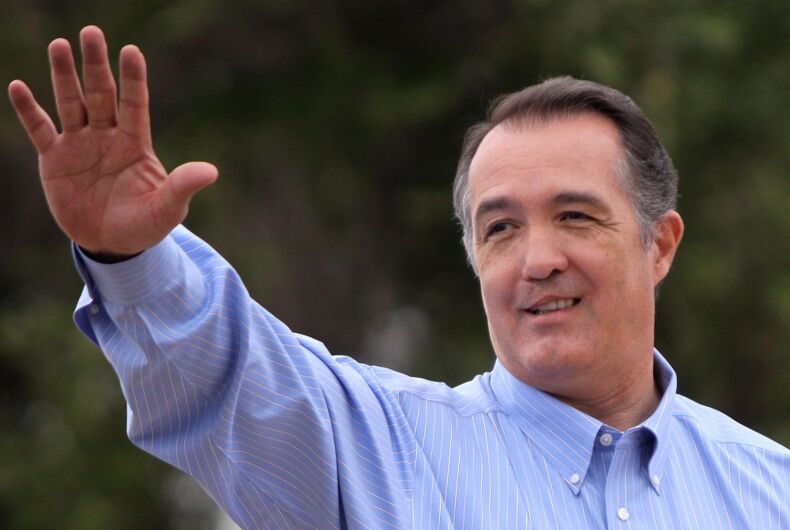 Representative Trent Franks (R-AZ) resigned on Friday following allegations from two female staffers that he repeatedly tried to get them to carry his child.

The two aides, who have not been named in the media, said that Franks asked them to carry his child. One of them said that he offered her $5 million and that he pressed her even after she had said “no.”

The women said that they were unsure if he was asking to have sex with them.

One of the women also accused him of retaliating against her by no longer talking to her on work-related matters and denying her assignments.

Franks released a statement on Thursday in which he admitted to asking the women to be surrogate mothers. He defended his actions, saying that he did not want to have sex with the women, as if sex is the only possible problem here, not the sexism and abuse of power.

He did not explain why he didn’t use more traditional, non-work-related means of finding a surrogate mother if that was his only intention.

Denying any wrong-doing, he said that he’s really just worried about what a House Ethics Committee investigation would turn up.

“In the midst of this current cultural and media climate, I am deeply convinced I would be unable to complete a fair House Ethics investigation before distorted and sensationalized versions of this story would put me, my family, my staff, and my noble colleagues in the House of Representatives through hyperbolized public excoriation.”

So he is thinking about the effects of his actions on everyone except for the victims. When it comes to them, he said that it’s the investigation against him (that their accusations initiated) that is actually hurting them and making “each feel uncomfortable.”

Even if his statement is 100% true, he is basically admitting to treating the women like baby incubators instead of employees. They were there to do their jobs, not to carry his child.

But then it’s not really surprising that a staunch opponent of reproductive choice would see the women around him as baby-makers first and people second.

Franks also has a long history of opposition to LGBTQ rights. He has consistently earned a “0” on HRC’s Congressional Scorecard. In 2011, he said that marriage equality is “a threat to the nation’s survival” and “a complete undermining of the principles of family and marriage and the hope of future generations.”

His statement on Thursday said that he would resign at the end of January 2018. On Friday, he said that he was resigning immediately.

Australian weddings will no longer start with an anti-LGBT statement