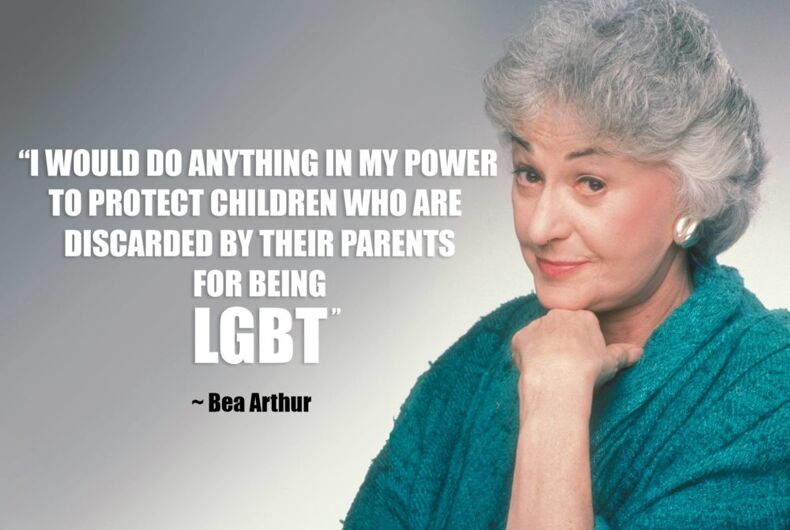 Bea Arthur was a longtime supporter of LGBTQ rights. A homeless residence for LGBTQ youth is named in in her honor in New York City.Photo: Ali Forney Center/Facebook

The event took place on Nov. 30, and many notables were on hand for the opening of the 18-room facility in the Lower East Side of New York City, including the late actress’s son, Matthew Saks, and her grandson, Brody Saks. It will help LGBTQ youth transition from homelessness.

The actress, best known for her co-starring role on The Golden Girls, was a big supporter of the LGBTQ community during her life, with a benefit performance of her one-woman show, Bea Arthur on Broadway: Just Between Friends, bringing in $40,000 for the center in 2005.

When Arthur died, she bequeathed $300,000 to the shelter. The organization received $3.3 million from the city to renovate the East Village property.

“We are proud to dedicate this residence in her honor, and humbled to celebrate this momentous occasion alongside Bea Arthur’s son and grandson,” said Carl Siciliano, Executive Director of the Ali Forney Center.

“The Bea Arthur Residence marks an important shift in the way that we are able to house and care for young people who have been discarded by their families simply because of who they are. Pending city approvals, we hope to begin housing young people here within the next few weeks.”

“My administration is committed to supporting New York’s thriving and diverse LGBTQ community. Critical to this mission are community organizations like the Ali Forney Center that are working to uplift and empower homeless LGBTQ youth across our city,” de Blasio said in an email, HuffPost reports.