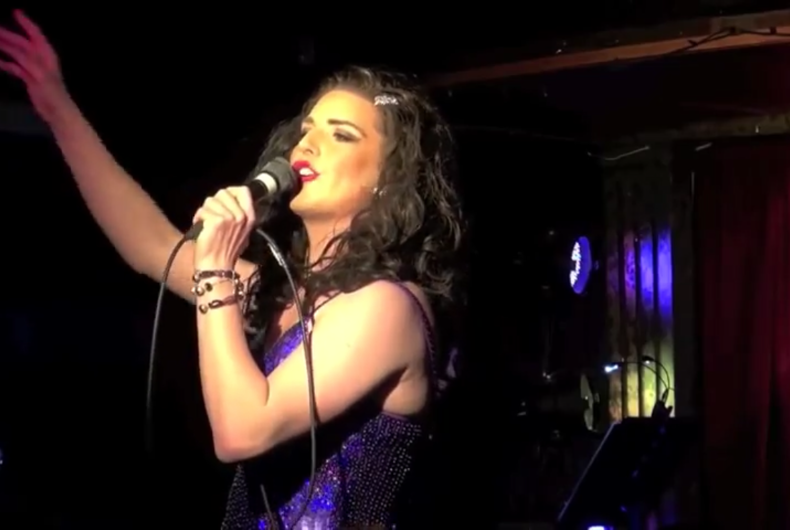 From a Facebook post, Redfern let his fans know that she were okay following her assault in robbery at the hands of three men in the early morning hours of Thursday, November 14.

Redfern continued that while he accepts that he’ll never see most of his valuables or material items again, he specifically hoped that he’ll get his Blue leather bag back with his diary.

Redfern spoke to PinkNews and said that “I’m both surprised and not surprised to be targeted…unfortunately[,] wearing drag in the street is still provoking for some people.”

“However, as I was in Soho and am fairly confident[,] I just didn’t imagine it would happen to me, especially there,” she said.

Redfern believes the three assailants were hanging out near a nearby Anne Summers store on Wardour Street, and they waited until after she exited the Poppies Fish and Chip shop on Old Compton Street to pounce. “They then ran off past [the Les Misérables] Stage Door and Rupert Street,” Redfern wrote on Facebook, pleading for leads. “DO ANY BUSINESSES HAVE CCTV Camera’s that look out in that direction?”

The 38 years old entertainer also described the three men as young and in their 20s,each of three different heights, hair styles and racial backgrounds: “English but of Greek heritage…English-Arabic…English black” guys, according to her initial Facebook post. She also warned her fans and tagged the Metropolitan Police Service in the post, but it isn’t immediately clear if they have responded to the incident.

The 2013 Drag Idol UK runner up was evidently not slowed or scared by the apparent homophobes in the slightest. In Redfern’s next social media post, she thanked everyone for their outpour of support, and then promoted her next performance – scheduled for November 15, that Friday night.

“Thanks so much for all the support / lovely message after Wednesday night’s incident. Looking forward to getting back into Soho tonight. 9pm at Admiral Duncan,” Redfern wrote. When a fan asks about Topsie’s future performances, someone else responds, “[She] doesn’t know…the bastards got his diary!”

Thanks so much for all the support / lovely message after Wednesday night's incident. Looking forward to getting back…

Under her name of Nathan Kiley, Redfern has quite the impressive acting resume, with stage and pantomime credits that stretch back as far as 2006. She’s also appeared in a VodaFone Ireland commercial and lent her voice to Confused.com financial ads.

According to Redfern’s Joogleberry profile, she has been a “professional performer since 2005,” and the Topsie Redfern persona came to fruition in 2012. She won Best Newcomer at the BOYZ MAGAZINE Awards in 2014, and describes herself as “cheeky but not crude”. View her 2013-released showreel below.

This is the second notable event of apparent anti-LGBTQ behavior on Old Compton Street this week, following the Admiral Duncan bar receiving a postcard criticizing them for their atypical patronage. “Old Compton Street was much better before you lot turned it into a gay street,” the anonymous note read.

PinkNews related this to the mounting evidence that homophobia and transphobia is on the rise in the United Kingdom, as they reported in June that “hate crimes have more than doubled” against transgender and homosexual people in England and Wales in just a four year span.

The rate of LGBT+ hate crime – including offences like harassment, assault and stalking – increased by 144 percent between 2014 and 2018.

One of Trump’s bigoted, anti-LGBTQ employees will now sit on the federal bench