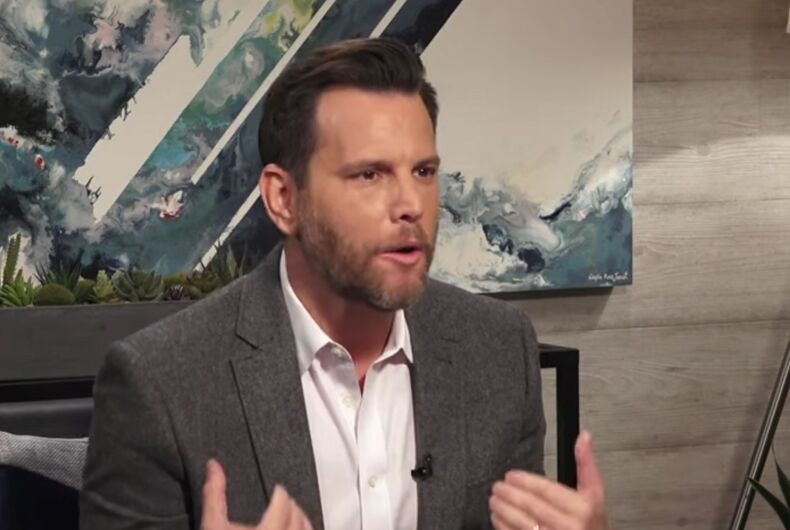 Dave Rubin had Donald Trump’s son on his show, and he told Junior that it’s OK to call him a “fag” now that marriage equality has been legalized.

Trump Jr. has been doing a media tour to promote his very deep, very thoughtful new book entitled Triggered: How the Left Thrives on Hate and Wants to Silence Us. A big part of promoting the book has been attacking trans women in sports in order to take attention away from the massive discrimination transgender people face.

On Monday, he was on a streamed interview on The Rubin Report, and he got on the topic of transgender people. Trump Jr. started saying that gay people are somehow being hurt by the fight for transgender equality. He did not denounce any of his father’s moves to take away gay people’s rights because Trump Jr., as a straight man, decided that the real threat to gay equality is transgender equality, not the Republican Party.

“It’s a constant movement of destruction, because to lift somebody, you always have to take somebody down,” Rubin said, explaining how conservatives understand the world.

“One day I’m going to have to do a podcast and ask you as a gay man, what are your thoughts as it relates to, sorta, outspoken activists, homosexual people getting owned by the trans movement and like it’s not enough,” Trump responded. “After all these years that you guys fought to get the equality that you have that people probably pretend doesn’t exist anyway.”

“All I ever wanted was exact equality under the law,” said Rubin, who’s gay. “That’s what we’ve got. Now we’re equal.”

“You can call me whatever you want. You could call me a fag right now and it wouldn’t mean anything to me.”

I try not to go too negative on the tl, but this bootlicking, soulless, untalented hack motherfucker telling the president’s large adult son he can call him a faggot is one of the most pathetic things I’ve ever seen pic.twitter.com/FsWTK9qRmI

If the son of the president of the United States called a gay man a “fag”? That might not mean anything to someone with no self-respect like Dave Rubin, but it would be a big deal.

The ideas that gay people are now fully equal, no longer face discrimination (or if they do, it’s so minor that it’s not even worth addressing), no longer face hatred that’s more than the occasional bad word, are popular among conservatives – even gay conservatives – as well as some pockets on the left. It’s ludicrous to people who pay attention to studies about discrimination, who read statistics about hate crimes… who just follow the LGBTQ news.

But the impulse is real, the impulse to pretend that everything is fine for an oppressed minority so nothing needs to change.

Anyway, neither Rubin nor Junior explained how transgender rights take anything away from gay people. It’s counterintuitive since, if anything, increasing acceptance for people to live their own truths when it comes to gender identity and expression will only increase acceptance for cis gay people.

Trump Jr. was apparently not even listening at that moment and he continued to rail on about how LGBTQ people don’t even want equality: “They actually don’t want equality. They want more than equality. Everyone needs some sort of form of reparations.”

Which… of course he said that. He is opposed to LGBTQ equality. He is concern trolling the LGBTQ movement by saying it’s a zero-sum game between gay rights and trans rights.

The interview continued and the main takeaway is that Trump Jr. is the real oppressed minority.

The relevant exchange starts at around the 15-minute mark.