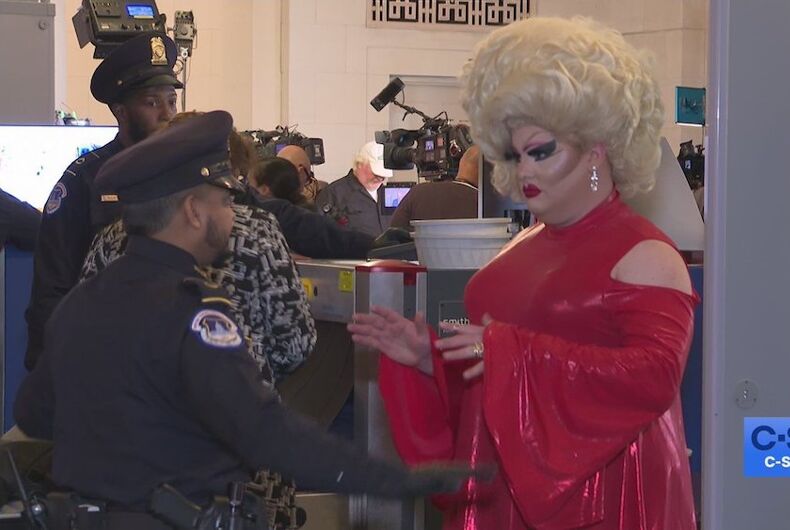 Pissi Myles, a drag queen from New Jersey, gets searched by officers in the Longworth House, an office used by the U.S. House of Representatives, while attending the Trump impeachment hearings.Photo: C-SPAN screenshot

Although today is the first day of televised impeachment hearings against President Trump, a New Jersey-based drag queen named Pissi Myles is the one grabbing all the attention.

The self-proclaimed singer, comedienne, Wigstock performer and winner of Philly Drag Wars and Miss Fish NYC 2014 is in D.C. covering the Trump impeachment hearings for Happs, an independent-journalist startup app.

Related: The son of Argentina’s new president is an amazing drag queen

Myles told NBC News, “It’s a crazy day in Washington! I’m flipping my wig over the high-energy proceedings today. Tensions are high, and the bar for who’s allowed in the Longworth House is very, very low.”

Myles is getting her share of love from Twitter users, including from Honey Davenport, a drag performer from Season 11 of RuPaul’s Drag Race. Here are some of the funniest reactions from Twitter:

Someone did ask me last night if there’s anything in DC that surprises me anymore.

What a freaking Icon. For all of you queens in a position of power who aren’t worried about anything else other than what joke you are going to tell, wig you are going to wear or… https://t.co/V61eLcGqjG

A 7ft Drag Queen showing up to the Trump impeachment hearing today is some funny shit. Pissi Myles is the star of the show! #dragqueen pic.twitter.com/ew2hPD3VoL

Obligatory "Boots the house down for your nerves, mawma, werk! *tongue pop*" https://t.co/R5O4nHFFdY

A drag queen going through security at the impeachment hearings is seriously relatable content. pic.twitter.com/D8MGbHiROj

There is a drag queen at the US Capitol today reporting on the impeachment proceedings. The most 2019 photo ever! Love it!!! pic.twitter.com/JWcroeBYhY

How dare they call Barbara Bush a drag queen?! https://t.co/3FtV0dydnt

Who wore it better? The drag queen currently waiting in line to see the impeachment hearing, or Rudy Giuliani? pic.twitter.com/5vPkmtsUBw

Of course, there are a few detractors, like these two serious and sober folks who seem to have forgotten that the president of our country is a former reality show host and WrestleMania 23 guest star:

In 1787, Benjamin Franklin told his fellow citizens that their new country would be a Republic, if they could keep it.

In doing so, he challenged future generations to govern with sober, serious minds and engage in earnest civic dialogue.

Oh dear lord this country is going straight down the shit shoot https://t.co/bT51PcTgnX

The impeachment hearings are examining Trump’s alleged withholding of millions in U.S. military aid from Ukraine unless Ukrainian authorities agreed to investigate Trump’s political rival Joe Biden and his son.

The televised hearings will include questioning of Bill Taylor, acting U.S. ambassador to Ukraine, and George Kent, the State Department official who oversees Ukraine policy.

So far, Republican committee members have used the hearings to push Fox News conspiracy theories, accuse the media of an anti-conservative bias, and to question whether the Bidens did anything even resembling corruption.

A gay man’s salary was cut in half when he came out. Now he’s suing.