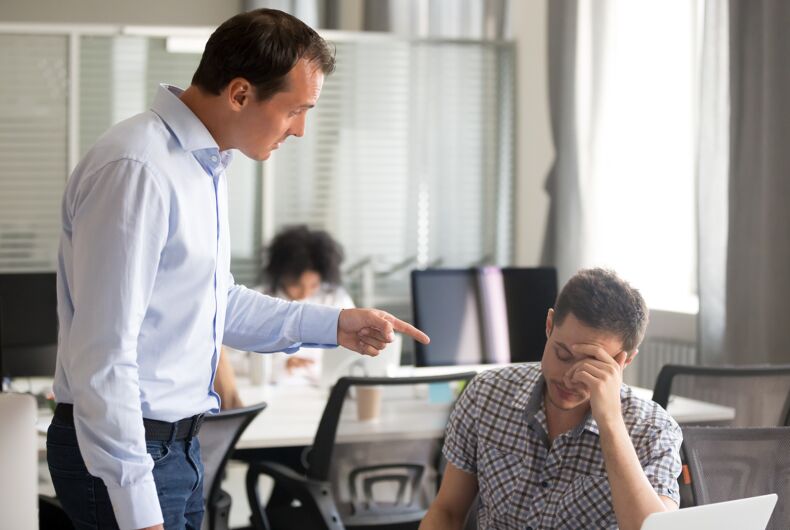 A gay man says that his employer cut his salary in half when he came out at work and made disparaging comments about his sexuality, in a lawsuit filed at the Manhattan Supreme Court.

Wesley Wernecke, 32, started to work for Eventique as a Senior Producer this past June, and his salary was $145,000. Eventique is an event planning company in New York.

After about a week of working at Eventique, a coworker asked Wernecke at a meeting about his wedding ring, which they called “flashy” and “girly,” according to court documents reviewed by the New York Post.

“So what does your wife’s ring look like?” the coworker asked, and Wernecke said that his husband’s is similar, outing himself at the workplace.

He says that the owner of the company, Liron David, was at the meeting and heard the exchange and started excluding Wernecke from meetings, stopped introducing him to clients, and didn’t invite him for drinks with other workers.

His lawyer Anthony Consiglio said that Wernecke was “aggressively” recruited for the position and that he had to move to New York from Boston for the job.

“About a week and a half after Wesley began work in the office, the employer learned he is gay, and then immediately began systematically shutting him out of the job,” the lawyer said.

On September 20, Wernecke claims David told him he was lowering his salary to $70,000.

“I couldn’t sleep at night thinking you were being paid so much more than the other females in the office,” David allegedly said.

Wernecke says that he doesn’t believe David was actually worried about a gender pay gap, but instead made the comment “to reinforce Wernecke’s understanding that David considered Wernecke to be a sexual deviant and unfit to work at Eventique.”

He found out when he was paid that his salary had actually been lowered to $58,000.

On October 4, David fired Wernecke, citing “errors” and “deficiencies” in his performance. Wernecke believes that that’s an excuse and that he was terminated because David is homophobic.

“These acts cannot be reconciled with the liberal anti-discrimination positions written into law in New York City and State to protect lesbian, gay, bisexual, queer, and transgender people in their workplaces,” Consiglio said.